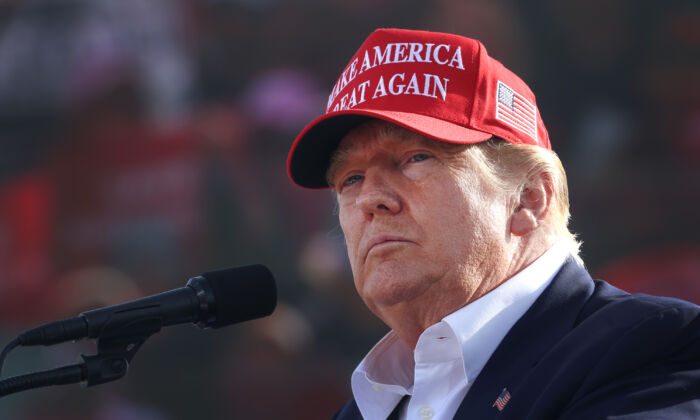 Former President Donald Trump speaks to supporters during a rally at the I-80 Speedway in Greenwood, Neb., on May 1, 2022. (Scott Olson/Getty Images)
US News

Request came from Rodney Joffe, who has said he was promised a position in a Clinton administration
By John Haughey

WASHINGTON—A technology executive who hoped to get a position in the government if Hillary Clinton won the 2016 election tasked a cyber company with compiling a report on about half a dozen Donald Trump associates and their families, the man asked to put the report together testified in federal court on May 24.

Rodney Joffe, the executive, approached Jared Novick, the CEO and part-owner of BitVoyant, in August 2016 with the request.

Novick recounted receiving a document that had the names of about six individuals, their spouses, their personal emails, and their addresses, along with other information.

The first name was Carter Page, the Trump campaign associate that was spied on by the U.S. government despite being an asset for the CIA.

Richard Burt, a lobbyist, was another name, Novick said.

According to a court filing, Paul Manafort and Roger Stone, two other Trump associates, were also listed.

The request was “extremely uncommon,” Novick told the court.

“The whole thing felt to me like opposition research,” he said. “It made me feel very uncomfortable.”

Novick went to Victor Oppleman, a friend who, like Joffe, was on BitVoyant’s board, and aired his concerns. While Oppleman also was displeased with the request, Novick ultimately moved forward with compiling the report, assigning three analysts to it.

The project was dubbed Crimson Rhino.

“The last thing I wanted was Donald Trump’s name” on BitVoyant’s tasking board so that everybody could see, Novick said. He restricted knowledge of the project to employees who had connections with Joffe. “I told them to hopefully do it quickly and get rid of it,” he said.

Joffe asked the company to “cast a large net” in the operation. He handed over Domain Name System data from the White House and Trump’s residences that he accrued through his own company, Neustar, to help with the project. The goal was “to go deep, as deeply as possible, go wide, not look through a soda straw but look at everywhere for things related” to the Russian Alfa Bank, Novick said.

Some of what turned up may not be related to Alfa Bank, Joffe said.

Novick was testifying during the trial of Michael Sussmann, a Clinton campaign lawyer who also represented Joffe in 2016 ahead of the election. Sussmann is on trial for allegedly lying to the FBI when he said he was not bringing information that he said showed a backchannel between Trump’s business and Alfa Bank to an FBI lawyer.

The bureau and the CIA later found the backchannel claim unsupported.

Trump’s spokesman didn’t respond to a request for comment on Novick’s testimony.

Novick’s team, after several weeks, finished the report and gave it to Joffe. He said he was told the information was going to an attorney.

Under cross-examination by Sussmann lawyer Sean Berkowitz, Novick acknowledged arguing with Joffe at times. He said he didn’t remember telling prosecutors that there was “a bit of friction” between himself and Joffe.

It remains unclear whether Sussmann will testify in his own defense. Prosecutors plan on wrapping up their case on Wednesday; defense lawyers will call former New York Times reporter Eric Lichtblau, FBI agent Tom Grasso, and “some character witnesses,” among others.