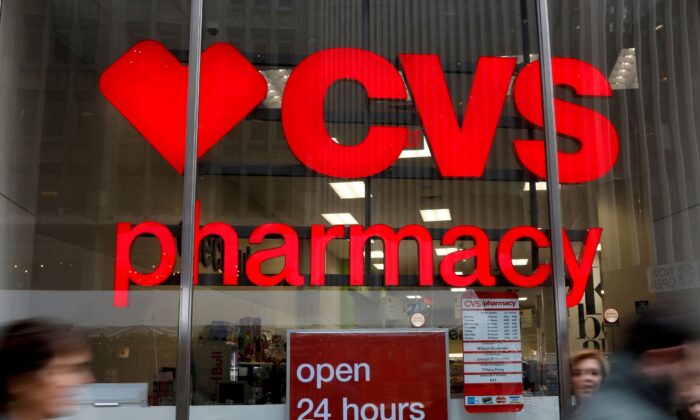 People walk by a CVS Pharmacy store in the Manhattan borough of New York on Nov. 30, 2017. (Shannon Stapleton/Reuters)
Judiciary

The CVS Pharmacy chain has dropped a potentially precedent-setting Supreme Court case in which HIV/AIDS patients are claiming that the company was discriminating against them by enacting a policy requiring people in need of specialty medications to receive them by mail rather than at a local pharmacy.

The case is CVS Pharmacy Inc. v. Doe. “Doe” refers collectively to five unnamed respondents who are individuals living with HIV/AIDS and who have employer-sponsored health care plans that allow them to obtain prescription drugs.

The case was scheduled for oral argument before the Supreme Court on Dec. 7, but the parties filed a joint stipulation to dismiss on Nov. 11, which the high court granted the next day.

CVS is one of the largest health care companies in the world. It owns pharmacies throughout the United States, but also functions as a pharmacy benefit manager that coordinates pharmacy benefits for people such as HIV/AIDS patients who are enrolled in employer-provided health care plans.

According to the attorney for the patients, CVS’s program limits people living with HIV to obtaining the medications they need by mail-order, depriving them of access to knowledgeable pharmacists and other benefits while continuing to make the same benefits available to others. The federal government and various disability groups had filed friend-of-the-court briefs in support of the patients.

Although the Supreme Court case has been dismissed, the litigation itself continues in U.S. district court, where it began.

In a December 2020 decision, the U.S. Court of Appeals for the 9th Circuit unanimously found that the patients had appropriately made a claim for disability discrimination based on the discriminatory effect of the policy, which they said had a different effect on non-HIV/AIDS patients.

CVS appealed to the Supreme Court, seeking to limit the reach of civil rights laws that provide people living with disabilities “meaningful access” to benefits. The high court might have reinterpreted civil rights laws, but because the case is withdrawn, it now returns to the federal district court for further proceedings.

CVS ought to make sure HIV/AIDS patients have an equal opportunity to access the same pharmacy benefits that other consumers receive, said Jerry Flanagan, litigation director for California-based group Consumer Watchdog and counsel of record for the patients in the Supreme Court action.

In the Supreme Court case, CVS “just fell on their sword and decided not to pursue the appeal, which means our 9th Circuit win stands,” Flanagan told The Epoch Times.

“They contacted us last week and said, ‘We don’t want to pursue the appeal anymore,’” he said. “I think the takeaway is that they, for whatever reasons, and they’ve been tight-lipped about it, it was pretty clearly a decision by the board at CVS not to pursue the case any longer at the U.S. Supreme Court.”

In a December 2020 decision, the U.S. Court of Appeals for the 9th Circuit stated that, until recently, the individuals had been able to fill their prescriptions at community pharmacies, “where they were able to consult knowledgeable pharmacists who were familiar with their personal medical histories and could make adjustments to their drug regimens to avoid dangerous drug interactions or remedy potential side effects.”

“These services, among others, are critical to HIV/AIDS patients, who must maintain a consistent medication regimen to manage their chronic disease,” the individuals stated.

But CVS changed its policy to require all health care plan enrollees to obtain specialty medications, including HIV/AIDS drugs, through its designated specialty pharmacy for those benefits to be considered “in-network.” The in-network specialty pharmacy provides specialty drugs “only by mail or drop shipments to CVS pharmacy stores for pickup,” which the individuals claimed violates the anti-discrimination provisions of the Affordable Care Act, the Americans with Disabilities Act, and the California Unruh Civil Rights Act. This practice also denied them benefits to which they’re entitled under the Employee Retirement Security Act and violates California’s Unfair Competition Law, they said.