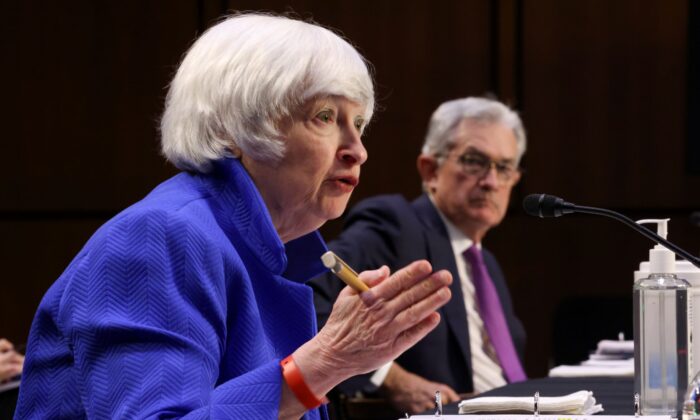 Reducing the tariffs on imported goods from China, imposed in 2018 by President Trump, through a revived exclusion process could help lower inflationary pressures on the economy, said U.S. Treasury Secretary Janet Yellen on Thursday at the Reuters Next conference.

“This is a process by which tariffs can be lowered. And I think that that could be helpful,” Yellen said regarding the tariff exclusion process. “Again, it’s not a game changer. But these are things we’re doing to try to mitigate these pressures.” The process is an opportunity by the public to comment for or against reinstating 549 exclusions (pdf) that were previously granted, and most of which expired in December 2020. The comment section closed on Dec. 1.

Yellen said of the Trump-era tariffs that “some of them create problems without having any real strategic justification.” The tariffs on 25 percent of billions of imported Chinese goods “do contribute to higher prices in the United States.”

Eliminating tariffs on Chinese goods could ease increasing prices, according to former Treasury Secretary Jacob Lew. “I’ve thought from the beginning that the tariffs were an ineffective way to deal with their attacks on American consumers. And right now, with inflation being an issue, rolling back tariffs would actually reduce inflation in the United States,” he said to CNBC Tuesday.

Last month, ahead of Biden’s virtual summit with Xi, around two dozen business groups urged the U.S. president to work toward removing the trade tariffs. They said that the higher input costs have been passed on to customers and are contributing to inflation.

“These costs, compounded by other inflationary pressures, impose a significant burden on American businesses, farmers and families trying to recover from the effects of the pandemic,” said the letter signed by the U.S. Chamber of Commerce, the U.S.-China Business Council, American Soybean Association, and other prominent trade groups.

The letter also mentioned the “respect for rule of law and human rights,” and that the organizations agree “forced labor and other human rights abuses should have no place in supply chains,” some of the issues covered under the tariffs.

U.S. tariffs on Chinese goods were at an average of 19.3 percent in 2021, while China’s reciprocal tariff rate is around 20.7 percent, based on data by Peterson Institute for International Economics. Before the trade war, China’s tariffs were more than double that of the United States at eight percent, compared to 3.1 percent by the United States.

Meanwhile, tariffs have had an extremely hard impact on the Chinese economy. During 2018 and 2019, 1,800 U.S.-funded subsidiaries closed down their operations in China, along with multiple foreign subsidiaries including those from South Korea and Germany.

Tariffs have been considered by numerous U.S. presidents as a tool to defend national interests but have been condemned by international organizations like the World Trade Organization (WTO). Since China joined the WTO in 2001, almost 60,000 factories have closed in the United States along with the loss of around 4 million jobs.

According to the phase one trade deal signed under Trump, China is required to buy an additional $200 billion worth of goods and services during 2020 and 2021. However, China has only met about 58 percent of this requirement through 2020, and 69 percent by August.

Yellen said that the exclusion process is one among several steps the Biden administration is undertaking to lower inflation rates in the country. The Treasury Secretary added that she was working with her Chinese counterpart, Vice Premier Liu He, in a bid to resolve a range of economic issues.

China “could make a big contribution to mitigating global imbalances. These are all topics that we’ve been discussing, and I expect those dialogues to continue.”