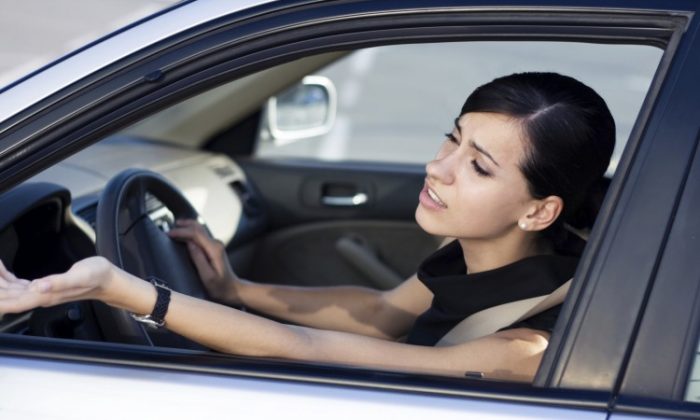 Drivers are most annoyed by cutting in and weaving, speeding, and hostile displays, according to a new Centre for Addiction and Mental Health study. (Polina Nefidova/Photos.com)
US

Cutting in, Weaving, Speeding Most Irritating for Drivers: Study

Drivers are most annoyed by those who cut in and weave through traffic, along with speeding and hostile displays, according to a new study by the Centre for Addiction and Mental Health (CAMH).

Dr. Christine Wickens, a post-doctoral fellow with CAMH, and her colleagues examined over 5,000 entries between 1999 and 2007 related to road rage posted on websites that ask drivers to describe unsafe driving practices they’ve observed.

The researchers sorted the complaints, consisting mostly of incidents in Canada and the U.S., into various categories, including speeding/racing, erratic/improper braking, and blocking. They found that most complaints (54 percent) involved cutting in and weaving, speeding (29 percent), and hostile displays (25 percent).

“These websites can tell us more about what people are doing out there in the real world,” Wickens said in a news release.

The CAMH researchers estimate that road rage is a factor in close to half of all road accidents. In some extreme cases, one reckless action can escalate into a hostile situation between multiple drivers, the research found.

Wickens said if the findings on the most common driver complaints are taught to new drivers during their training, it could help them avoid these types of behaviours once they get on the road. It could also make new drivers more aware of their reaction when encountering these behaviours by other drivers.

She advises drivers keep calm behind the wheel.

“Remind yourself to take a deep breath, stay calm, and do whatever it takes to bring your anger down,” she said.

According to a survey by Leger Marketing done for Kanetix.ca, 79 percent of Canadian drivers admit to road rage-like behaviours.

The most common road rage behaviours admitted to were speeding (61 percent), using profanity out of frustration with traffic delays (39 percent), and following other vehicles too closely (23 percent).

The poll, published last November, also showed that drivers who admit to exhibiting road rage say their aggressive behaviour is most commonly triggered by distracted drivers not paying attention.

Two in five of the survey respondents also said their road rage is caused by seeing other drivers around them exhibiting road rage.