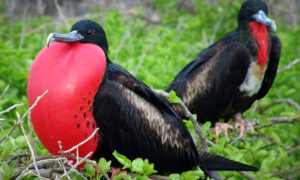 10 of the Weirdest-Looking, Most Oddly-Behaving Birds in the World
0
Share Now
TelegramFacebookTweetEmailTellMeWeReddit
Copy Link
Animals

Have you seen the cute lemur video? There’s a high chance. After all, the video has been played on Facebook more than 60 million times—and who can blame you anyway? The little primate gesticulates so comprehensibly, bossing the children for more backscratching.

You may have wondered why the lemur let the kids pet it. Perhaps you thought it was living nearby and naturally became familiar with people. Or was it perhaps rescued in some fashion?

The truth is, as far as we know, much less heart-warming.

The lemur’s mother was killed in the illegal bush meat trade and the baby was taken as an illegal pet, according to Lisa Gould, veteran lemur researcher with the University of Victoria, who explained the backstory in a comment to the video on Facebook.

The sweet animal-video-turned-sour perpetuates what appears to be a trend of viral publicity misrepresenting wildlife issues or even making the problems worse.

For example, after Pixar blockbuster “Finding Nemo” debuted in 2003, U.S. imports of ocellaris clownfish jumped 30 percent, possibly because the movie’s main character was modeled after the fish. Conservationists sounded the alarm, saying the movie made the decline in the clownfish population worse.

In another case, videos of slow lorises, small Asian primates with big sad-looking eyes, garnered tens of millions of views on YouTube, yet were called out for tacitly encouraging cruel pet trade, where the animals have their teeth removed so they won’t bite, often die during transport, and often end up malnourished.

Lemurs have so far avoided such massive attention, discounting appearances as side characters in the “Madagascar” movies.

Or at least they had until the back-scratching video.

What will happen now is hard to predict.

Saving Endangered Lemurs on A Budget of $7 Million

Hunting or catching lemurs both for meat and pet trade is illegal in Madagascar, where lemurs live.

Yet people still do both, while the natural habitat of lemurs shrinks due to deforestation.

There are over 100 lemur species, of which 90 percent are endangered, some critically. More than 30 species of them have been kept as illegal pets, according to research by Kim Reuter, a biologist with Conservation International.

Traveling across the African island in 2013, Reuter and her colleagues conducted over 1,300 interviews with locals to map the situation of bush meat trade and of catching lemurs as pets.

As opposed to hunting animals for meat, the lemur pet trade is less organized in Madagascar. The most common way to get one was to catch it yourself, the interviews indicated.

Some critically endangered lemur species only have a few thousand left in the wild, meaning even the limited pet trade can cripple conservation efforts.

“For example, if a species has already lost 80 percent of [its] habitat and is then popular with the pet trade, then all of the reforestation projects in the world are not going to save that species unless you tackle the pet trade issue,” Reuter explained via email.

Regarding the viral lemur video, Reuter said it “completely lacked the context needed for people to truly understand what they were seeing.”

“It later turned out this lemur was not a ‘pet lemur’ per se, but probably an escaped pet lemur that now prefers the company of humans,” she wrote.

That may sound rather benign, but Reuter said the context is still important, pointing to a study on how visuals can influence people’s perception of wildlife.

In a study in San Diego Zoo, people were shown a picture of a primate with a human or just the primate alone. The ones who saw the picture with a human were more likely to say they’d want the animal as a pet, Reuter said.

Conversely, lemur conservation efforts could use some increased exposure. In 2013, the International Union for Conservation of Nature sought $7 million to fund a anti-poverty program to give locals other ways of sustenance than destroying the forests. According to the World Food Programme, 92 percent of the 23 million people on the island live in poverty.

If every person who watched the viral lemur video donated just $0.12, the program could have easily surpassed its fundraising goal.

That’s exactly what Reuter suggests. If you like lemurs, donate to conservation groups like Lemur Love or Lemur Rescue Center.

Visiting Madagascar for some ecotourism also seems as a legitimate way of support. But, please, don’t touch the lemurs, Reuter advises.

If you see one kept as a pet, don’t take pictures with it.

“If you see a lemur in your hotel or restaurant in Madagascar, there is a 99 percent chance that it is not there naturally, even if it is not physically restrained,” Reuter wrote.

You may even politely suggest “that you do not support their ownership of a lemur,” she wrote.

You can also anonymously report any sightings to the Pet Lemur Survey, run by Reuter.