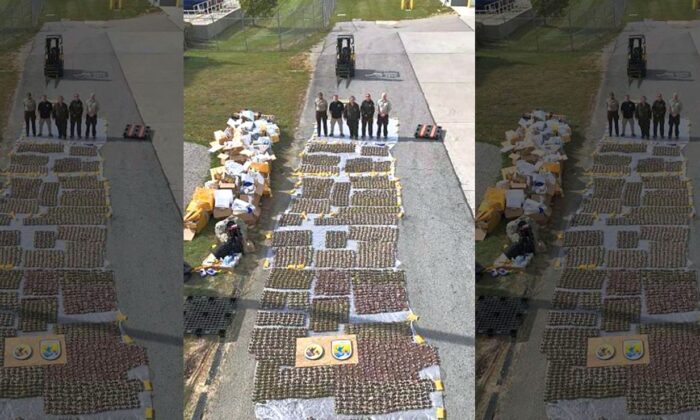 Customs agents in Cincinnati announced the seizure of approximately 3,700 mitten crabs from several shipments that were being transported to the United States from China and Hong Kong. (CBP)
US News

Customs agents in Cincinnati announced the seizure of approximately 3,700 mitten crabs from several shipments that were being transported to the United States from China and Hong Kong

In a news release from the U.S. Customs and Border Protection (CBP), the live crabs were shipped falsely as “tools and various clothing articles.”

About 3,400 pounds of crabs were discovered in 51 shipments over the past four months, the agency said.

“The shipments originated in China and Hong Kong and were destined for residences and businesses in multiple U.S. states, although most were headed to New York,” the CBP wrote.

The crabs were described as “a seasonal delicacy in Asia” and can be sold for as much as $50 in the United States, said the agency.

However, the CPB noted that they are among the worst invasive species on earth and have “have been found in California waterways, the Chesapeake and Delaware Bays, and the Hudson River.” They have had a “disastrous impact on native habitats,” according to the news release.

“During fall months they are imported from Asia through U.S. international express and mail facilities” while “it is illegal to import mitten crabs and other injurious wildlife into the United States without a permit as specified in the Federal Lacey Act,” the agency noted.

The U.S. Department of Agriculture lists mitten crabs, which are also known as the Chinese mitten crab, as an invasive species.

According to the U.S. Fish and Wildlife Service (FWS) in a report (pdf), “Chinese mitten crab cause a number of problems in their introduced range. They may out‐compete native crab, mussels, and crayfish for food and space. Their voracious appetites can completely alter the aquatic food chain and cause a general decline in the species it competes with and/or consumes.”

The crabs were “introduced into the Bay–Delta” in the late 1980s or early 1990s before the peak population was reached in 1998, according to the FWS’s website.

The CBP’s news release said that some 15,000 mitten crabs were intercepted at ports of entry since September 2019. The Port of Cincinnati, meanwhile, experienced the overall highest volume of smuggled animals, while the Los Angeles Port of Entry was second.

“As a unified border agency, CBP is committed to a fully integrated approach toward international security,” said Cincinnati CBP Supervisory Agriculture Specialist Barbara Hassan in a statement. “In this case, we worked closely with FWS to stop a serious threat to our economy and ecology.”