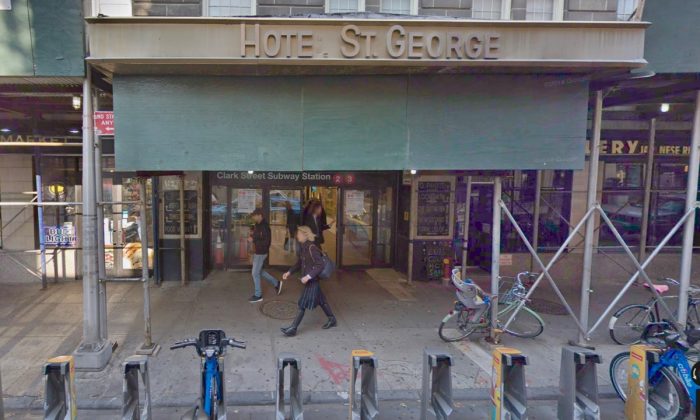 The Clark Street Subway Station in Brooklyn, New York, where 17 people were stuck in an elevator. (Screenshot via Google Maps)
NY News

Seventeen commuters were trapped in a subway station elevator in Brookyn, New York, for about an hour before first responders arrived to help them climb out.

Talia Kovacs told the New York Post that after the button to call for help was pushed, the group was not told how long help would take to arrive. They were only told that the Metropolitan Transportation Authority had been notified.

“We called them, and they were like, ‘Oh, we don’t know—we’re working on some other stuff right now,’” Kovacs told the New York Post. She said the MTA said they would call back but didn’t.

She said the group was okay at first, and chatted together about difficulties with New York City’s subway system. But as they realized that the help wouldn’t be immediate, the mood turned.

The group was also frightened by sounds of what they thought was falling debris.

“We thought the elevator was caving in,” Kovacs told The New York Times. “We had no idea what was going on.”

They were to find out later that all the extra commotion was actually the sound of firefighters working to reach them.

When the firefighters finally arrived at the elevator, the group didn’t know what to make of the banging sounds they made, since no one had told them help was on the way, the Post reported.

“About 45 to 50 minutes [into the ordeal], we started hearing just a lot of banging. Some folks were crying—but then a lot more people started crying and panicking. It felt like the ceiling was caving in. We didn’t know what was going on,” Kovacs told the Post. “But then this very friendly firefighter pops through the ceiling and was like, ‘Hey, I’m gonna get you guys out.’”

“We were just sitting in the hot, sweaty elevator,” Kovacs told NY1. “People were crying, men and women were crying. There was an elderly person who felt really faint.”

Kovacs said that once the firefighters arrived, the group had to climb up two sets of ladders, past rungs, and then walk a lot of steps.

“This was really bad. It was too long, too hot,” said Kovacs via NY1.

After the ordeal, Kovacs pledged to get off a station early and walk in future commutes.

The MTA issued an apology, obtained by CBS 2, saying the elevator was 87-years-old.

The Clark Street subway station is notorious for having elevator problems. There are no stairs or escalators down to the subway platform, so commuters are forced to take the elevator.

“They are a major problem,” a subway commuter told NY1. “Very often, you only have one running, sometimes two.”

Sometimes trains bypass Clark Street station due to the elevators going out of service, according to NY1.

The elevator in question, elevator 312, broke down 15 times in the second quarter of 2018. It’s No. 4 on the list of least reliable New York City’s 54 subway elevators, NY1 reported. It is due to be replaced under the MTA’s five-year Capital Improvement Plan.

NYC Transit spokeswoman Amanda Kwan said the situation had been handled without delay.

“An elevator maintenance crew immediately responded to reports of customers in this elevator,” she said, via the Post. “FDNY also responded and helped 17 customers exit the elevator safely. We sincerely apologize to those customers who were impacted and thank FDNY for their assistance.”