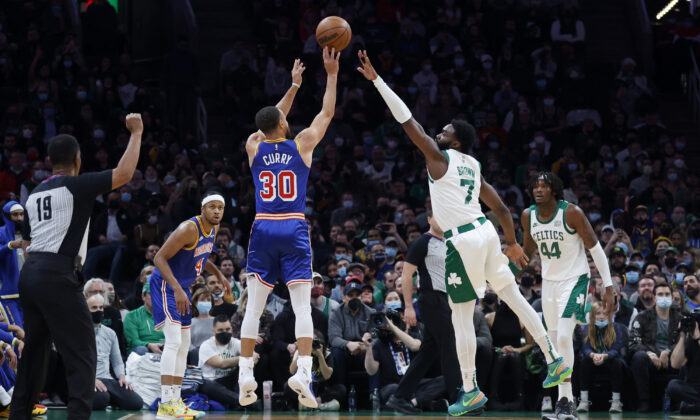 BOSTON—Stephen Curry was still aglow over becoming the NBA’s all-time 3-point shooter when the Warriors got a scare that’s becoming frighteningly common in the league—and other sports, too: Guard Jordan Poole was placed into COVID-19 protocols.

“We’re coming off the emotional roller coaster … a lot going on around the league,” Curry said after scoring 30 points in a 111–107 victory over the Celtics on Friday night. “You try not to get distracted by all the things that are outside the locker room.”

One game after breaking Ray Allen’s 3-point record at Madison Square Garden, Curry hit five 3-pointers and added a one-handed scoop shot in the final minute to help the Warriors snap a five-game losing streak against the Celtics.

Andrew Wiggins scored 27 and Kevon Looney had 10 rebounds for the Warriors, who won their third straight game on an East Coast road trip to reclaim sole possession of the NBA’s best record (24–5). They wrap up the trip Toronto on Saturday.

“On a five-game trip, guaranteeing us at least three wins makes this a good trip,” coach Steve Kerr said. “Now tomorrow is more of a free swing.”

Jayson Tatum scored 27 points, and Jaylen Brown had 20 points and nine rebounds for the Celtics, who placed five players in COVID-19 protocol in the 24 hours leading up to the game. Robert Williams III grabbed 11 boards.

The crowd was peppered with fans in Curry jerseys who cheered for him and the Warriors and mustered an “M-V-P!” chant when he went to the line. But when he fouled out in the final seconds, the Boston fans stood to wave him goodbye.

In his first game since breaking Allen’s record of 2,973 3-pointers, Curry hit back-to-back 3s on his first two shots of the game, giving the Warriors an 11-point lead just four minutes in. He made his last with about 4 1/2 minutes left to complete an 8–0 run after the Celtics had cut the deficit to two points.

Boston again got within a basket—the last time on Marcus Smart’s second-chance 3 with 4.2 seconds left. But Damion Lee made a pair of free throws with 2.8 seconds to play to ice it.

“It means I’m incredibly lucky to coach a bunch of talented guys,” said Kerr, who won the NBA championship in his first season and two more in the next three years. “From my first game coaching in the NBA until now, I’ve had nothing but talented teams.”

The NFL on Friday pushed back three games, and the NHL has shut down three teams until after their Christmas break. So far, the NBA has postponed two Chicago Bulls games.

“There’s a little PTSD from everybody in terms of what we went through last year,” Curry said. “You’re trying to make sure you stay on top of [it]. I know every sports league is dealing with protocols. I hope we get it right, no matter what that means.”

The Warriors were also without Klay Thompson (Achilles tendon) and James Wiseman (knee), and Boston’s Dennis Schröder was out with a non-COVID illness.

The Celtics cut a 20-point, second-quarter deficit to 10, getting back-to-back 3-pointers from Josh Richardson and Tatum and an 18-footer from Brown to make it 64–54 just before the half.

But on the Warriors’ last possession of the half, they inbounded the ball to Curry with 0.9 seconds left. He fired up a 50-footer but Smart fouled Curry as he landed, giving him three free throws with 0.1 seconds on the clock; Celtics coach Ime Udoka picked up a technical, making it four.

Curry hit them all—his only points of the quarter.

“The second quarter where we gave them four points, that was kind of a gut punch,” Tatum said.

Curry scored 38 and 47 against the Celtics last season—making 11 3-pointers in Boston—but the Warriors lost both matchups. … The Warriors are 7–0 on ESPN this season. … Celtics guard Romeo Langford remained on the court for an extended period after taking Wiggins’s accidental elbow to the head with about five minutes left in the first quarter. Langford made both free throws and went to the locker room; the team said he was out with neck pain.