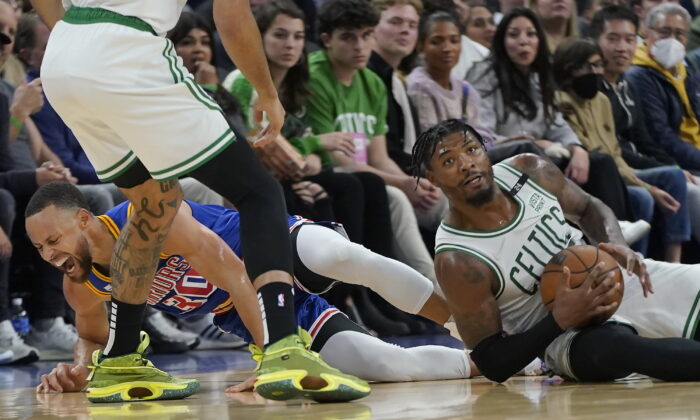 Golden State Warriors guard Stephen Curry (L) reacts after going for a loose ball next to Boston Celtics guard Marcus Smart during the first half of an NBA basketball game in San Francisco on March 16, 2022. (Jeff Chiu/AP Photo)
NBA

SAN FRANCISCO—Stephen Curry went down with a left foot injury late in the first half and Golden State coach Steve Kerr didn’t like Marcus Smart’s lunging move at the reigning NBA scoring champ.

Smart got an earful from Kerr, then they chatted again after the Boston Celtics beat the Warriors 110–88 on Wednesday night.

Curry was injured with 4:19 remaining in the second quarter along the sideline while scrambling for a loose ball as Smart made a diving lunge on the play and landed on the reigning scoring champion’s leg. Curry grimaced in pain and got up but hobbled along before exiting on the next dead ball moments later.

That came when Smart made another aggressive play, receiving a Flagrant 1 foul 4:09 before halftime when he leapt and caught his leg on Klay Thompson’s shooting arm.

Kerr said Curry, who had three points on 1-for-4 shooting, was having an MRI exam. Rookie Moses Moody also injured his right shoulder.

Warriors forward Juan Toscano-Anderson said Smart wanted the ball but might have been able to use more caution.

“I don’t think it was a dirty play,” Toscano-Anderson said. “… We all know that’s Marcus Smart, though, that’s how he plays, he’s gritty.”

Draymond Green was whistled for a technical for arguing a foul called on Thompson against Smart at the 1:48 mark, with Green throwing his arms up in the air in disgust and yelling.

Jayson Tatum had 26 points and 12 rebounds to lead Boston, while Jalen Brown scored 14 of his 26 points in the first half. Smart wound up with 20 points on 8-of-12 shooting and eight assists.

The Warriors couldn’t keep up in their fourth straight home defeat to the Celtics and sixth of seven matchups in the Bay Area.

Boston’s stingy, top-rated defense held Golden State to a cold 29.3 percent in the first half and 37.2 percent overall as the Warriors were limited to 19 assists. Jordan Poole was 1 of 8 but recovered to scored a team-high 29 points.

This was a tough blow for Curry two days after he dazzled for 47 points on his 34th birthday in a 126–112 win against the Wizards on Monday.

Green came off the bench for a second straight game as he regains his strength from a back injury, his minutes increased from 20 to 22.

Second-year center James Wiseman returned from his assignment with the G League Santa Cruz Warriors and will continue to build up his conditioning. He started all three games and averaged 17.3 points—going 22 of 42 for 52.4 percent—9.7 rebounds and 1.67 blocks over 20.7 minutes.

He hasn’t played since April 10 last year while recovering from right knee surgery.

“The main thing is he’s healthy and he’s moving well and that’s the biggest thing,” Kerr said. “That was our biggest concern going in. Can he build the momentum, sustain it and continue to work on his conditioning, timing and so far, so good. Happy to see him out there.”

Celtics: Derrick White was 0 for 8 missing all five of his 3-point tries. Former Warriors assistant Aaron Miles, now with Boston, made the rounds saying hello to familiar faces before the game. Boston improved to 4–7 on the road vs. the Western Conference.

Warriors: Poole has scored 20 or more points in eight straight games. Andrew Wiggins and Nemanja Bjelica were both out with a non-COVID-19 illness, the second straight game Wiggins missed. Golden State would have been the first team this season to reach 30 home victories. The Warriors won the first meeting in Boston 111–107 on Dec. 17. The Warriors shot 7 for 21 in the first quarter.

Celtics: At Sacramento on Friday night.