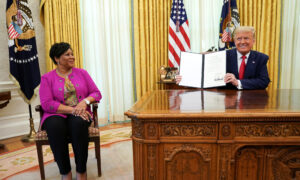 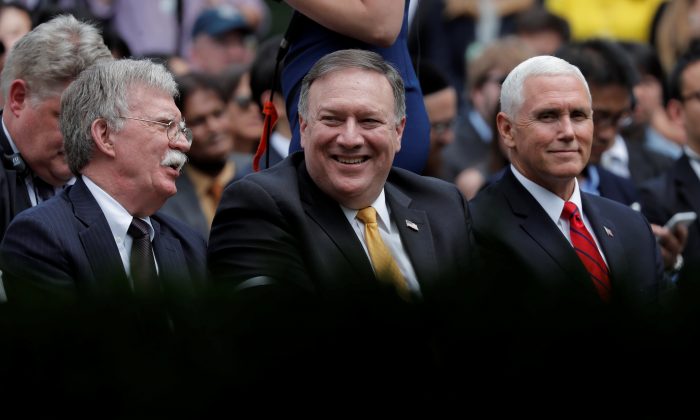 U.S. Secretary of State Mike Pompeo awaits the start of a joint news conference by U.S. President Donald Trump and Japan's Prime Minister Shinzo Abe as he sits between National Security Advisor John Bolton and Vice President Mike Pence in the Rose Garden of the White House in Washington, on June 7, 2018. (Reuters/Carlos Barria)
US News

The Atlantic’s Jeffrey Goldberg, citing anonymous sources, asserted that Trump made disparaging about Americans who died in the war. It also said that he skipped a visit to a Parisian cemetery because he allegedly feared the rain would mess up his hair.

“I didn’t hear that,” Bolton said in an interview. “I’m not saying he didn’t say them later in the day or another time but I was there for that discussion.”

Earlier in the day, Pompeo denied the Atlantic’s account.

“I’ve been with this president coming on four years. I’ve never heard the president use the language,” he told Fox News on Friday. “I’ve never seen that. Indeed, just the contrary.” Going further, he said Trump has the “deepest respect” for the U.S. armed forces.

“I’m a veteran too. I care deeply about these young men and women. I watched the president honor them in every situation that I have been in with him,” Pompeo, a former U.S. Army officer, said in the interview.

Pence also denied the report, saying that Trump never scuppered his visit to the cemetery because of his hair.

“It never happened. I talked to the president that day. I know how disappointed President Trump was that there was a bad weather call that did not permit him to fly to Belleau Wood to honor our fallen there,” Pence said in a televised interview.

The Atlantic Magazine is dying, like most magazines, so they make up a fake story in order to gain some relevance. Story already refuted, but this is what we are up against. Just like the Fake Dossier. You fight and and fight, and then people realize it was a total fraud!

Instead, he said Trump cares deeply about the military and their families, noting the administration’s efforts to boost funding for the military and reform the Department of Veteran’s Affairs.

“I reject this out of hand as everyone who has spoken out on it,” Pence said. “I think the American people see through this for what it is: just one more anonymous smear job with an election just a couple of months away.”

Defense Secretary Mark Esper said that Trump respects military members, saying in a statement that it “is why he has fought for greater pay and more funding for our armed force.”

Trump himself also denied the allegations, describing them as “fake news.” He blasted The Atlantic for being a “dying” publication that is seeking relevance by making up “a fake story.”