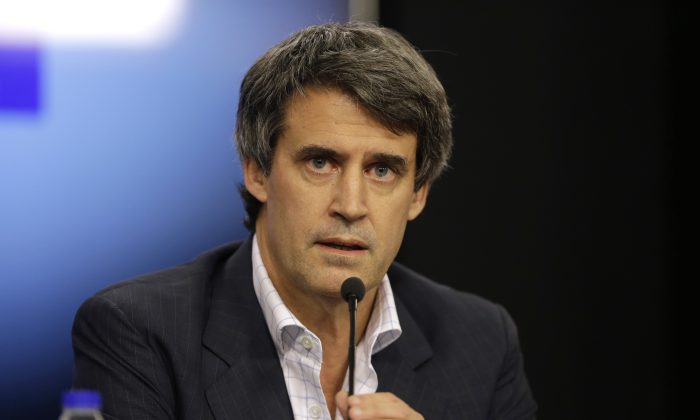 BUENOS AIRES, Argentina—Argentina lifted deeply unpopular restrictions on buying U.S. dollars Wednesday, aiming to put an end to a byzantine monetary system that made it difficult for businesses to operate and spawned a booming black market.

The move, a campaign promise of new President Mauricio Macri, was outlined by Finance Minister Alfonso Prat-Gay. The decision, combined with the lifting of export taxes on many agricultural products announced earlier this week, will expose Latin America’s third-largest economy to international market forces in ways not seen for a dozen years.

“This system choked the economy for the last four years,” Prat-Gay said at a news conference that was broadcast live Wednesday night. “We are now returning to normal.”

Attempting to shore up dwindling foreign currency reserves, the preceding administration of President Cristina Fernandez instituted restrictions on buying foreign currency in 2011. It was one of many protectionist policies instituted during 12 years of governments led by Fernandez and her late husband and predecessor as president, Nestor Kirchner.

Argentines who wanted to buy dollars, a common practice in a South American country with a long history of financial meltdowns, had to meet several requirements. And most were limited to a few hundred dollars a month—when U.S. currency was available in banks.

The limits, locally called a “cepo,” or “clamp,” led to dual exchanges rates. Over the last year, while the official exchange rate was fixed around 9 Argentine pesos to the dollar, on the black market a dollar fetched as much as 16 pesos.

Businesses, especially those needing to deal in dollars, were deeply affected. While the Fernandez administration insisted that dollars coming into the country trade at the official rate, getting dollars out at that rate, if at all, proved difficult.

“The ‘clamp’ killed the supply of dollars. It didn’t stop the demand,” said Prat-Gay.

While the change will be celebrated by international investors and welcomed by many Argentines, there is also much fear about a sharp devaluation of the peso, and what that might do to already soaring prices.

Annual inflation this year is estimated at around 30 percent. Between the time Macri was elected on Nov. 22 and his inauguration last week, many businesses jacked up prices in hopes of protecting themselves against any devaluation. Other businesses, such as factories, simply shut down to wait to see what happens to the peso.

In recent weeks, economists have estimated the true value of the peso is around 14 or 15 to the dollar. For the first time in four years, that will be put to the test when markets open Thursday.

There are concerns the lifting of currency rules could lead to a run on banks by Argentines eager to buy dollars. The nation’s foreign reserves are just over $24 billion, a very small amount for an estimated $600 billion economy.

Without providing any details, Prat-Gray said that to insulate against this risk, his team had been negotiating with China and several financial institutions to quickly bring in several billion dollars over the next month.