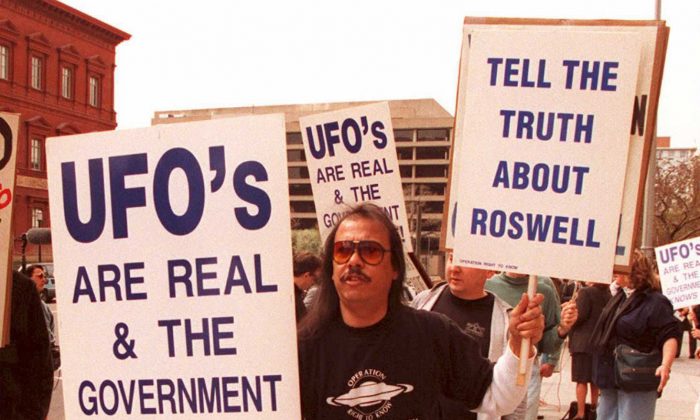 Protesters march in front of the General Accounting Office (GAO) in Washington D.C. in 1995. During the Clinton Administration, the GAO was examining documents about a weather balloon crash in Roswell, N.M. in 1947. At this time, then-President Bill Clinton was also attempting to gather the truth regarding the crash at Roswell, Area 51, and the alleged visitation by extraterrestrials. (Joshua Roberts/AFP/Getty Images)
Life Beyond Earth

Curious History: U.S. Presidents Believe in the Existence of UFOs

Conspiracy theorists have claimed for decades that the U.S. government has been hiding evidence that extraterrestrials (E.T.s) and their vehicles have been visiting Earth and partaking in other dubious acts. However, many Presidents themselves may have been believers in E.T.s and believers that there is more to the unidentified flying object (UFO) phenomenon than just cases of mistaken identity.

“Seeing is believing,” as they say.

That proverb was true for at least one former U.S. President who didn’t believe in UFOs until he saw one with his own eyes. Nobel Peace Prize winner and former U.S. President Jimmy Carter had a UFO sighting while he was serving as governor of Georgia in 1969. He reported the incident to the International UFO Bureau in Oklahoma City, according to Yahoo Voices.

In recent interviews he has said, along with about two dozen others, that he saw a bright, multicolored, circular light in the sky that disappeared into the west at about dusk outside a Georgia school. He doesn’t claim it came from out of this world. But he does claim that it was indeed flying and unidentified, according a Larry King Live interview.

“I don’t laugh at people any more when they say they’ve seen UFOs,” said then-Governor Carter at a Southern Governors Conference, according to The Telegraph. “I’ve seen one myself.”

Former President Bill Clinton has openly spoken out about extraterrestrial life and UFOs and has been very forthcoming about his belief that E.T.s exist and that we’re not alone. Presidents may not be immediately privy to all the nation’s secrets, as Clinton claims to have had aides research Area 51 and Roswell during his presidency.

“If we were visited someday I wouldn’t be surprised,” Clinton said in an interview on Jimmy Kimmel Live that aired last month. “I just hope it’s not like ‘Independence Day.’ … It may be the only way to unite this increasingly divided world of ours. Think about [it,] all the differences among people of Earth would seem small if we feel threatened by a space invader,” he said.

Clinton isn’t the first U.S. President to talk about an alien invasion scenario. President Ronald Reagan said he saw a UFO during a 1974 Cessna Citation flight over Bakersfield, Calif., along with three other passengers. He alerted pilot Bill Paynter to the UFO, which was described as being elongated and moving at an incredible speed. Reagan told the story to the Wall Street Journal’s Washington bureau chief Norman C. Miller, according to the Discovery Channel.

Reagan expressed thoughts on the matter similar to Clinton’s.

He said in a speech to the United Nations in 1987, according to MSNBC: “I occasionally think how quickly our differences worldwide would vanish if we were facing an alien threat from outside this world.”