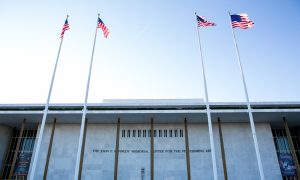 Perhaps one of the greatest historical anomalies in the New World—the Anubis Caves in Oklahoma—gives evidence of an ancient cult’s mysterious presence in pre-Columbian America.

Located in the panhandle of Oklahoma, near Tulsa, the Anubis Caves consist of three insignificant-looking caves containing unusual carvings that depict the Egyptian jackal god Anubis, as well as a carving of a bull. A local rancher presented the caves to the scientific community in 1978.

Not too far from the cave site, a 500-pound sandstone rock sits along the Arkansas River. The rock, discovered by two brothers in 2010, depicts a large carving of a bull similar to Egyptian hieroglyphic images of the Apis Bull, which was considered to be divine by the early Egyptians. This bull carving is very similar to the bull in the Anubis Cave carvings.

Additional carvings can be found along Turkey Mountain, just a short distance from the sandstone site. The carvings contain examples of ‘Ogham,’ an old Celtic language, according to the History Channel’s “America Unearthed.” Ogham is the oldest-known form of writing in Ireland and Scotland, dating back to 350 A.D. in Ireland. The language may have originated in ancient Libya, being brought to the Celts by traveling missionaries.

More examples of Ogham writing can be found in the Anubis Caves, as well near yet another bull carving. Anubis Cave expert Phil Leonard believes that the carvings were made by ancient Mithra worshippers and that the cave was designed to serve as an equinox marker, according to the History Channel.

The Anubis Caves site represents the best-preserved records of the Cult of Mithras, which spanned the Roman and Persian Empires, according to Ancient American magazine. The Sun God Mitra was worshipped in India before 2,000 B.C., and worship of this god eventually spread into Persia and Asia Minor. The name evolved into “Mithra” and later “Mithras,” by the Romans.

When Mithraism was eventually spread to the Celtic people in Western Europe and Britain, a great emphasis was placed on the story of Mithras slaying the bull, according to Ancient American. Interestingly, the bull carving on the Arkansas River stone appears to be bleeding, which gives further credence to the Mithras theory.

The mystery remains of how exactly ancient Celtic people made their way to Oklahoma. However, the idea that Vikings traveled into North America as far West as Minnesota is becoming more widely accepted.