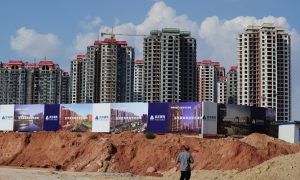 The problem in China of “grey income”—money obtained off the books, often by corrupt means—can only be solved by political reform.

Grey income has always been an interesting topic as well as a serious problem. It reflects many facets of China’s darker side, from the entire political system to its management and supervision systems. The soaring amount of grey income is a result of increasing illegal activities and worsening official corruption on all levels.

Grey income in China amounted to 620 billion yuan ($101 billion) in 2011, or 12 percent of China’s gross domestic production that year, according to an income survey conducted by economist Wang Xiaolu, Deputy Director of the National Economic Research Institute of China Reform Foundation.

What, then, is the source of this mammoth amount of grey income? Deng Xiaoping, the so-called chief engineer of China’s reform and opening up, planned to allow some people to get rich first—namely, Deng’s descendants and other Communist Party officials and their descendants. How was this accomplished?

First of all, some policies have cleared the path for grey income. The Chinese state’s revenue equals roughly one-third of China’s GDP, excluding the nation’s natural resources, according to Mr. Wang Xiaolu’s estimates. The money should have been used on public services, but the Chinese government has invested very little on social welfare such as health care and education.

In 2011, for example, China’s health care spending was only 5.2 percent of GDP. This is lower than that of many other developing countries, not to mention developed countries, which spend from 8 percent to over 10 percent of GDP on education.

While the Chinese state claimed to put a strong emphasis on education, they didn’t increase the education spending to 4 percent until 2012. This is mid-low level among developing countries, and lower than some African countries that are far poorer than China.

So where did all the money go? The government invested a large part of its revenue on many projects. As the funds trickled down to lower levels, officials at each level took the opportunity to peel off profits, often by hiring their relatives or friends and taking kickbacks, or simply hiring themselves. Officials and businesspeople often conspired to pocket project funds.

The second source of grey income is industrial monopolies and the monopoly of profits.

Grey income is exceptionally high in monopolized industries, especially those of resources like petroleum, electricity, and natural gas.

The petrol system is a similar picture. Recently many petrol industry senior officials were arrested on corruption charges. They even own a hundred-billion-yuan company that is not officially registered. They use state resources without paying a penny for tax. What do they do with all the money? They divide it among themselves, of course.

The third way of obtaining grey income is through SOEs’ initial public offering (IPO). Theoretically, since SOEs are owned by the state, they belong to all Chinese people. However, SOEs that have collected huge amount of funds through IPO are deciding the allocation of the funds themselves.

A Chinese finance department official once revealed that when the general manager of a state-owned insurance company was investigated, the GM was discovered to have paid himself 7.5 million yuan (US$1.2 million) per year. The investigators were shocked, but they didn’t know what to do with him.

What made him deserve such a salary? The GM couldn’t have cared less; he just paid himself that much. What qualified him to be a general manager? The only reason was that he was the Party secretary at the company before it went public. He got his 7.5 million yuan salary right after the IPO.

The fourth source is the capitalization of land.

As the governments have increasingly relied on land sales, land prices have skyrocketed, since the local governments have full control of land supplies. Many have forgotten the fact that land belongs to the state and all the people, and used to be assigned to individuals for free.

Land sales have also become a way for government officials to collect kickbacks from real estate developers. The best properties are sold to those who provide the highest bribes or maintain a good relationship with officials. The grey income from this channel is incredibly high. One thousandth of a project would be worth millions or tens of millions of yuan, or several or perhaps scores of housing units.

The fifth source of grey income is state employees’ double track wage system. While their salaries are relatively low, their total take-home is very high when various kinds of subsidies and bonuses are added.

I know a junior level cadre in a mid-size city whose salary is about 2,000 yuan ($327) a month, but his actual monthly income is over 4,000 yuan. In other words, his subsidies are higher than his salary. He also receives a year-end bonus and many other kinds of bonuses.

Why is that? The governments now have many ways to make money, such as approving projects and land sales. This extra income is divided among the officials in various forms, such as bonuses or holiday supplements.

The sixth source is the capitalization of political power.

The Chinese government charges high fees for its daily administrative services such as the issuance of permits and project approvals.

Some Party officials have been found to own many coal mine shares, which were given to them in exchange for government approvals. Only after they pocketed these shares would the officials issue permits in time or give the green light for inspections.

Another source is serious financial corruption.

A 2003 central bank investigation found that, in addition to loan interest, bank clients also have to pay banks “gratuities” and fees to “maintain good loan relationships” with financial organizations. Such additional fees are as high as 9 percent of the total mortgage.

This is why China’s bank officials make so much money. A bank clerk can get a salary of hundreds of thousands of yuan a year, while a mid-level manager easily earns over a million.

All the above sources of grey income originate from the flawed political system as well as erroneous policies. This has negatively impacted Chinese society.

The monopoly of resources and the lack of transparency in government work lead officials and businesses to conspire to generate grey income, which lures more officials to become corrupt and more business people to conduct illegal activities.

Meanwhile, due to the tightly controlled media and little supervision of the government, businesses lack a fair environment to compete in, and social wealth cannot be allocated fairly. Polarization and the sense of insecurity have seriously undermined social stability.

The gap is further confirmed by Wang Xiaolu’s investigation, which revealed that the Gini coefficient (an index used to measure income inequality) in China’s urban areas has exceeded 0.5, well above the safety level of 0.4.

Such a high Gini coefficient has only been seen in a very few extremely impoverished countries. Also, the calculation did not include China’s rural areas, which have much lower income than urban areas. The actual Gini coefficient on the national level is even higher.

Another study conducted by a university showed that China’s Gini coefficient in 2010 was 0.61, with 0.56 for urban areas and 0.60 for rural areas.

All of the above factors point in one direction: make money at all cost. Power, land, and national resources can all be sold for profit. Nothing can stop the officials from greedily grabbing money.

At higher levels, officials ignore and distort the facts and selectively enforce the law to make money. At the grassroots levels, for the sake of money, families have been broken, elders abandoned, and children uneducated. People despise poverty more than prostitution.

What’s worse: in a country with over 5,000 years of civilization, human organs are systematically harvested and sold.

Critical resources like land, energy, and mines are now used to gild officials’ “accomplishments” and cashed out to deposit in officials’ personal bank accounts.

In a money-worshipping society, officials and businesses collaborate to abusively exploit resources. The unregulated exploitations are destructive to land and mines. Polluted water, air, and soil are negatively impacting the ecological balance.

There is more smog and less farmland. Growing numbers of cancer villages, and toxic foods that can’t be avoided, show that every Chinese has paid for China’s “economic take-off” with losses in their physical and mental health.

Mountains are no longer green, and water is no longer clear. People are learned but not civilized. After just a few decades of communist reign, China is no longer the beautiful homeland we once knew.

The solution to the grey income-driven corruption is an all-around reformation, including the reformation of the political system.

On the economic front, monopolies must be broken in banking, petrol, electricity, and other key industries. Resource-based SOEs should be charged much higher resource taxes. In addition, SOEs’ profits should be invested in public welfare, since SOEs belong to all the Chinese people and should not benefit only a small group of people.

Secondly, some SOEs should be privatized and participate in fair market competition.

China’s political reformation has been lagging. After 30 years of “reformation,” the Chinese Communist Party (CCP) has not changed its autocratic ruling at all. Disaggregating the CCP and implementing a democratic system is the way to bring about fundamental changes for the better. Every Chinese should be given his or her legal rights, and a system that effectively supervises the government has to be established.

In my opinion, it is critical to set up an election-based system so that any officials who are not doing a good job can be voted out. Media freedom and the free flow of uncensored information are also very important, as the media should be able to monitor and reveal illegal behaviors for the society.