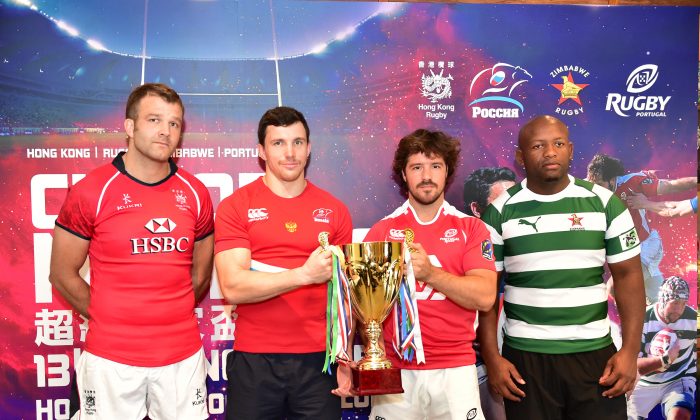 Captains of the four teams (L-R) Hong Kong, Russia, Portugal and Zimbabwe after the press briefing on Wednesday, Nov 11 and ahead of the start of the Rugby Union Cup of Nations to be held in Hong Kong between Nov 13 and Nov 21, 2015. (Bill Cox/Epoch Times)
HK Rugby Union

HONG KONG—Teams from Russia, Portugal and Zimbabwe have arrived in Hong Kong to compete together with hosts Hong Kong in a 4-team line up to compete for the 2015 Rugby Union, Cup of Nations 2015.

Matches in this tournament will take place at the Hong Kong Football Club on three competition days spread over 8 elapsed days, starting this Friday, Nov 13, 2015.

The teams invited to take part by World Rugby are from countries that just missed competing in the recently completed Rugby World Cup. The teams hold world rankings of 22 (Russia), 24 (Hong Kong), 26 (Zimbabwe) and 28 (Portugal).

The competition will be a single round robin with the winner being the team scoring the highest points. Points for the tournament will be awarded as follows: Win 4 points, Draw 2 points, with a bonus point for teams scoring 4 or more tries in one game or if losing a match by 7 or less points.

First round matches  are on Friday, Nov 13 with Portugal vs Russia at 4:00pm, and Hong Kong vs Zimbabwe starting at 7:00 pm.

Each team will be allowed to nominate a squad of 23 players for the series.

A Press Briefing was given on Wednesday, Nov 11 at the King’s Park Club House for the Press to meet team Captains and Team Head Coaches.

All captains and coaches said they are looking forward to the test series which they see as demanding with 3-matches spread over 8-days and see the series as important to start shaping teams for next year’s competitions and with an eye towards the next World Cup qualifiers.

Each coach emphasized that these are not development squads but some of the top players in their countries. However, Russia in particular, has brought in quite a changed squad from the one that played in Hong Kong last year and has a mixture of seasoned players and some recent caps to give the latter more exposure at this level. This is the first time for Zimbabwe and Portugal to play 15-aside matches in Hong Kong although both compete in the Hong Kong Rugby Sevens.

There will be no gate entry charge so a good spectator turnout is anticipated.