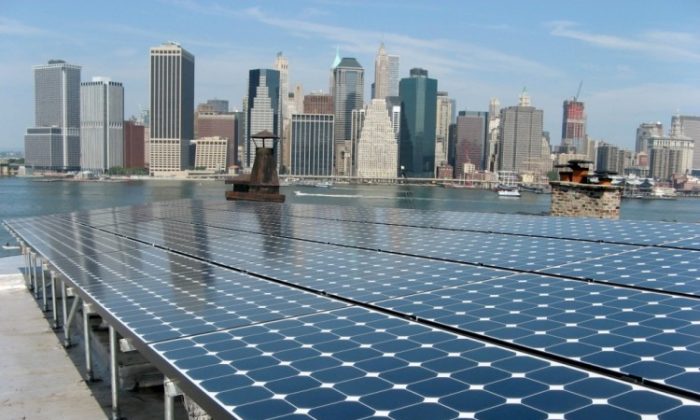 Solar panels installed by the company AeonSolar on a building in Brooklyn Heights. (Courtesy of AeonSolar.com)
US

“We support Gov. Cuomo’s efforts to increase the amount of solar we have in the state. In the short term it is a really good addition to what is a pretty good solar state policy,” Jim Torpey, director of market development at SunPower Corporation said on Thursday.

The program is funded for four years, but where that money is coming from after the first two years is up in the air.

“For the first two years we know exactly where the money is coming from because we put in a petition to move some money around to make sure we had that money. The second two years has not been determined yet, but it will be soon,” Dale Zatlin of NYSERDA said on Thursday. NYSERDA is the state agency that receives the funding from PSC to allocate to those eligible for rebates and credits through solar policy.

While Cuomo’s plan is still in the early stages, this funding will help meet the goals set forth by the governor in his 2012 State of the State address. Cuomo set targets of installing double the customer-sited solar capacity from 2011 in 2012 and quadruple that amount in 2013. Customer-sited means the solar power at a residence or business, but not on a utility scale.

To date, New York state has installed a total 110 megawatts of solar, however only 27.4 megawatts are customer-sited, according to Zatlin.

With instability in solar pricing, the short-term plan by the governor will allow some flexibility in policy, however for businesses looking to open up shop in New York state, those on the wholesale and retail side, would like to see a longer term approach.

“The governor’s program gets us started and I think the legislation can give us a longer term vision in a program to extend it beyond the time frame of the governor’s NY Sun Initiative,” Thorpy said.