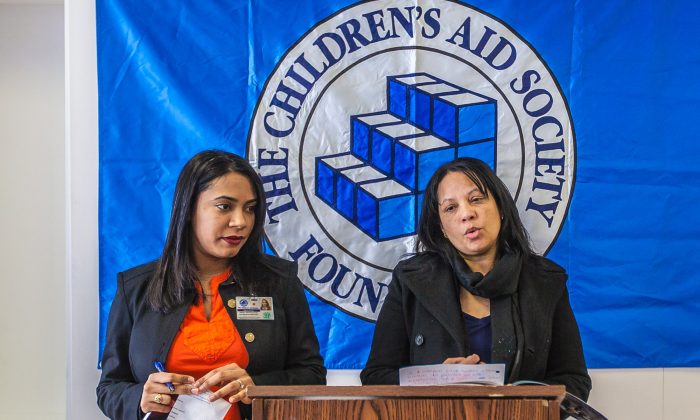 NEW YORK—Ingrid Chavier lives in Washington Heights and her daughter suffers from asthma. There are days when she drops her at school and in a few hours gets a call about her having an asthma attack.

Those are the days she’s grateful there’s a health center at the school. “The immediate care she receives … may be a difference between life and death,” she said through a translator at a Jan. 23 press conference at the Children’s Aid Society Dunlevy Milbank Center in Harlem.

But now they may end up as collateral damage to the state’s effort to cut down on health care spending.

So far, SBHCs receive monthly funds for every registered child on Medicaid directly from the state, and additional funds for certain above-standard services. Under the reform, the state wants to get rid of this model and instead fund the SBHCs through “Managed Care Organizations” (MCO) that should keep an eye on whether certain services are actually necessary or whether two different providers aren’t paid for the same service.

Under the new model SBHCs may not get paid monthly, but instead have to fill a claim to be reimbursed for each individual service. At the same time, the MCOs need to take care of their own expenses first, so the actual provider ends up getting less money for the same service than what the state would pay.

Due to this, SBHCs may lose more than $16 million annually, about 50 percent of their income, according to a study released on Jan. 23 by the Children’s Defense Fund, a child advocacy nonprofit.

The reform should go into effect in about 10 months and the state’s Health Department put together a working group to find a way to keep the school health centers open. Both SBHCs and MCOs are represented, as well as other stakeholders, including unions. Two meetings have already taken place, but with no solutions on the horizon.

Lorraine Gonzalez-Camastra, director of Health Policy at Children’s Defense Fund, hopes their report will help to crack the issue open at the next meeting, as well as raise some awareness. “This can get lost in the bigger picture of Medicaid reform,” she said. “We don’t want it to get lost. If these centers go away … it’s going to affect the public health of our children.”