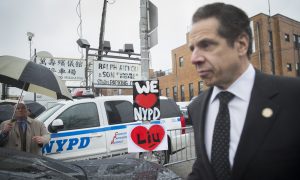 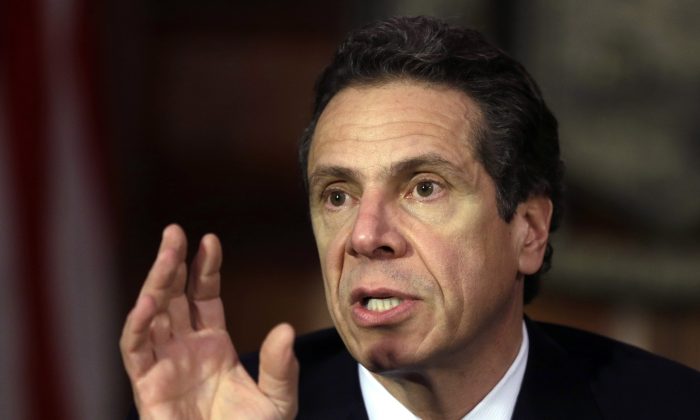 New York Gov. Andrew Cuomo at the Capitol in Albany, N.Y., on April 16, 2013. Cuomo is proposing legislation that would expand to New York's private colleges the "yes means yes" regulations against sexual assault that have been adopted at the state's own university system. (AP Photo/Mike Groll)
New York

Cuomo to Expand Safeguards Against Assault to Private Colleges

NEW YORK—A “yes means yes” provision and other protections against sexual assaults on campus would be expanded to New York’s private colleges and universities under a law proposed Saturday by Gov. Andrew Cuomo.

The governor said the bill would combat sexual abuse “and the imbalance of power that women face across the board.” It would expand policies in effect since last year at the state’s public university system.

“It’s worked very, very well,” at the State University of New York, the governor said. “We now want to codify it as a law.”

The bill would require that a woman give “clear, unambiguous, and voluntary” consent before any sexual activity. To encourage victims to come forward, students reporting assaults would get immunity from related offenses such as drug use. And victims would be offered the option of reporting an assault to state police rather than campus authorities or a local police department.

We now want to codify it as a law.
— Gov. Andrew Cuomo

“You have my word,” the governor said, that state police “will handle this professionally and will understand who the victim is.”

John Beckman, a spokesman for New York University, the private college where the news conference was held, said in an email: “We believe that NYU’s definition of consent is in line with the governor’s proposal. … We believe the governor is right that all colleges and universities in NYS should be looking at their practices to reduce the incidence of sexual misconduct, and ensure that sexual misconduct cases are handled swiftly, fairly, and appropriately.”

Calls and emails to several other private colleges were not immediately returned. A Cornell University spokeswoman said the college was “unable to provide a comment” on Saturday.

California has had a similar law since September that applies to any college that receives state money for student financial aid. Cuomo said he felt the New York measure would “go nationwide” if it became state law.

“When you do something in the state of New York, people notice,” he said, predicting it would “start a dialogue across the nation.”

Former New York City Council Speaker Christine Quinn, on her first day as an adviser to Cuomo, said at the governor’s news conference, “Sexual abuse and rape have become an epidemic across the landscape of college education.”

But Caplin said accountability and transparency are needed at the federal level “because students across the country not only deserve, but are demanding, real action.”

Fifty-five colleges and universities face federal investigation for their handling of sexual abuse allegations, and the Education Department said reports of forcible sexual offenses on U.S. campuses rose from 3,443 in 2011 to 4,062 in 2012.

Cuomo said he anticipated some trouble with the bill in the state Legislature, but said, “If women make their voice heard on this issue, I guarantee you it will pass. It is that simple.”

“It is right, it is righteous, it is inarguable,” he said.

The governor, without naming any schools, said some institutions “don’t want the publicity of the attacks happening on their campus, so they do what they can to tamp it down.” He said some declare a sexual attack “a private matter.”

“No, it’s not a private matter,” Cuomo said. “It’s a crime. And the woman is not complicit, she’s a victim.”