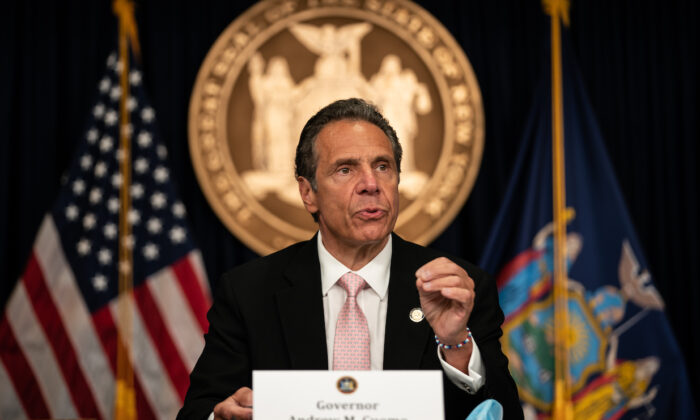 New York Gov. Andrew Cuomo speaks during the daily media briefing at the Office of the Governor of the State of New York in New York City, N.Y., on June 12, 2020. (Jeenah Moon/Getty Images)
AMERICA

New York Gov. Andrew Cuomo on Thursday floated the idea of subjecting people coming into the state from COVID-19 hotspots to a mandatory two-week self-quarantine.

Cuomo made the remarks at a June 18 briefing at which he expressed concern for the rising rate of infections in a number of states, including Arizona, Florida, and Texas, while praising his own state of New York for flattening its curve.

“Our number of hospitalizations, lowest level since we started, amen, 1,400,” Cuomo said. “Number of deaths, 17 deaths in the state of New York. 17. Lowest number since we started.”

Official New York Department of Health figures show that, on June 18, New York state performed 79,303 tests, of which 796 were positive for the Chinese Communist Party (CCP) virus, the novel coronavirus that causes COVID-19. Expressed as a percentage of tests that are positive, that is around one percent.

Early during the outbreak, Florida imposed a quarantine for travelers from New York state, which was the country’s infection hotspot.

“Fast forward, now we’re afraid they’re bringing it to our state,” Cuomo said of Florida. He called a second wave of infections “a real concern,” and something that “could happen,” which is why he said a 14-day quarantine as a COVID-19 mitigation measure is “something I’m considering.”

“I haven’t made a decision yet, but have had experts advise me of that,” he added. He credited the improving COVID-19 metrics in New York with a data-driven, phased approach to reopening.

He blamed the rise in virus spread on “unmanaged reopening” and urged other states to adopt a structured approach to reopening.

“So, we get the infection rate down and then because other states are high, we could have a problem. This country has to wake up. Wake up and smell the coffee,” Cuomo said.

“New York—it’s working. We’re saving lives. The virus is down, the rest of the nation it’s going up,” he said, adding, “At the end of the day New York Tough works.”