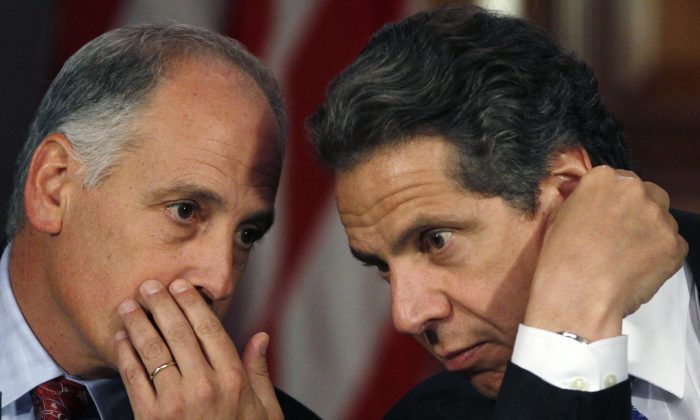 Larry Schwartz (L) secretary to the governor, talks to New York Gov. Andrew Cuomo during a cabinet meeting at the Capitol in Albany, N.Y., on Wednesday, May 9, 2012. (Mike Groll/Associated Press)
New York

NEW YORK—New York Gov. Andrew Cuomo’s approval ratings have fallen to record lows, according to the first poll conducted after federal investigations of his possible interference with the Moreland Commission became widely known.

Despite having fallen from 58 to 53 percent last month, Cuomo’s favorable rating is still more than double that of his Republican challenger Rob Astorino, who managed 22 percent.

“The problem for Rob Astorino is that the controversy involving Governor Cuomo’s office has not, so far, shaken up the race,” said Dr. Lee Miringoff, director of the Marist College Institute for Public Opinion.

The Marist College poll showed that 52 percent of the electorate believed that the governor’s staff behaved unethically in their involvement with the commission, but only 23 percent said it would be a major factor in deciding whom to vote for in November.

Cuomo’s opponent in the Democratic Primary, Zephyr Teachout, is still unknown to 78 percent of voters, and negative opinion of the long-shot candidate continues to rise.

“When voters realize there is an actual Democrat running in the primary, we expect his support to plummet further,” she said in a comment on the new poll.

Manhattan U.S. Attorney Preet Bharara has been investigating whether Cuomo’s office interfered with the Moreland Commission after Cuomo dissolved the commission in March.

The investigation has unearthed evidence that Cuomo’s aide Larry Schwartz instructed a co-chair of the commission to retract a subpoena to the media firm Buying Time, who worked with Cuomo’s 2010 gubernatorial campaign.

The subpoena was reissued several weeks later, which Cuomo has stressed as proof that the commission was independent.

“If you had watched the movie to the end, the name of the movie is ‘Independence,’ you named it ‘Interference,'” Cuomo told reporters last month.

The results of the investigation have become a rallying point for Cuomo’s opponents after the New York Times published a lengthy front-page evisceration of the governor’s dealings with the Moreland Commission.

Teachout, who is to the left of Cuomo politically, held a joint press conference with Rob Astorino to attack Cuomo for corruption. Previously she had called on the governor to resign, if he knew about his top aide’s actions.

The investigation of the Moreland Commission hasn’t slowed down in recent weeks, with Cuomo’s aide Larry Schwartz agreeing to meet federal prosecutors in August, the Wall Street Journal reported.

Nassau County District Attorney Kathleen Rice, a co-chair of the Moreland Commission, has met with Bharara multiple times to cooperate with the investigation, reported the New York Post. Rice’s spokesman declined to comment on Rice’s role in the investigation.

Several members from the disbanded commission have come forward to defend the Cuomo administration, including one of the commission’s three co-chairs, William Fitzpatrick, district attorney of Onondaga County.

“If I or my co-chairs or any other commissioner had been told or ordered not to pursue a sensitive topic, I can state with a high degree of certainty that we all would have resigned” he said in a statement.

Fitzpatrick’s wife, Diane, is a judge on the Syracuse Court of Claims and up for another nine-year reappointment in March by the New York governor.

Thomas P. Zugibe and Frank A. Sedita III, the Rockland and Erie County district attorneys respectively, were also members of the commission who denied ever being strong-armed by Cuomo’s office.

Sedita also said that in the summer of 2013 there were “rumors” that the governor’s office “sought to veto” subpoenas of the governor’s allies, but that the Cuomo administration ultimately “agreed not to interfere with our work.”

Their rush to Cuomo’s defense has sparked suspicions that the governor’s office has been in contact with Moreland commissioners to mold their testimonies.

Last week, a letter was sent to Cuomo’s office from U.S. Attorney Bharara warning the administration against trying to influence the testimonies of members of the disbanded commission, the New York Times reported.

Cuomo’s office has hired outside counsel to litigate the case. Elkan Abramowitz, the lawyer hired, is a self-described “leading white collar criminal defense lawyer” whose most prominent case involved defending the film director Woody Allen against charges of child molestation.