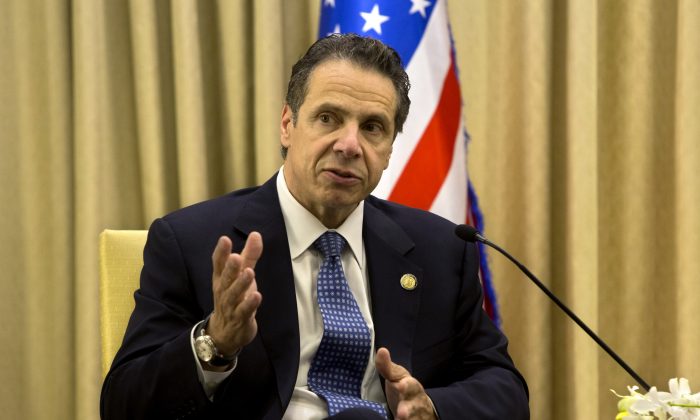 New York Gov. Andrew Cuomo speaks during his meeting with Israel's President Reuven Rivlin, at the President's residence in Jerusalem, on Wednesday, Aug. 13, 2014. Cuomo had lots to say about the underground tunnels he saw after returning from a trip to Israel, but once again he was asked about the Moreland Commission. (AP Photo/Sebastian Scheiner)
New York

NEW YORK—New York Gov. Andrew Cuomo had lots to say about the underground tunnels he saw after returning from a trip to Israel, but once again he was asked about the Moreland Commission.

The governor’s conciliatory rhetoric stands in contrast with his initial response to the media spotlight on allegations of his office’s interference with the anti-corruption panel, which he called a “phenomenal success” on July 28.

“Did we get everything accomplished we wanted [with the Moreland Commission]? No. Did we make significant headway? Yes,” Cuomo told Bartiromo over the phone.

Cuomo still insists that the commission “did a very good job,” and said his office was “working with prosecutors” in their investigation of the commission.

The bulk of Cuomo’s discussion with the Fox News host was dedicated to his trip to Israel with a delegation of New York state leaders.

Cuomo has been a long-standing supporter of Israel. He gave an interview with Jewish Week during his unsuccessful bid for governorship in 2002, which explained his strong connection to Israel, where he visited twice that year.


“I am a born-and-bred New Yorker. I was raised in a community in Queens with Jewish people. Two of my three brothers-in-law are Jewish,” he said.

Cuomo’s 28-hour visit to Israel was financed with his campaign funds and not taxpayer dollars, according to the New York Daily.

Dubbing Cuomo’s trip as “very presidential,” Bartiromo asked Cuomo whether he had talked with Hillary Clinton about her not running for president in 2016, opening up a window for him in the race.

The governor brushed off the talk about his possible designs on the presidency, saying that he has talked with Clinton, but not about any of that.

“I thought [my trip to Israel] was gubernatorial of me; I’ve been to Israel many times before; I was in the Clinton administration and I worked with Israel,” Cuomo said.

Cuomo was also asked about his upcoming re-election race in November, where he currently leads his Republican challenger Rob Astorino by 32-points in the polls.

“I take nothing for granted, I work very hard,” Cuomo said. “I feel good about the job I’ve done in the state of New York.”