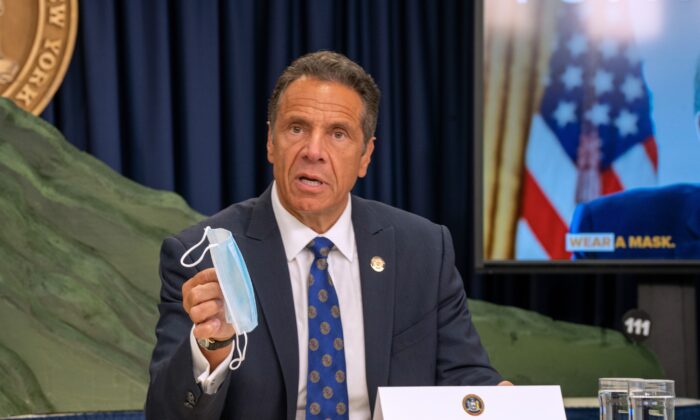 New York Gov. Andrew Cuomo on Monday rejected calls for an independent probe into the deaths of COVID-19 patients in New York nursing homes, claiming demands for such an investigation are politically motivated.

State politicians on both sides of the aisle have called for an investigation into what role, if any, a controversial executive order may have played in fueling deaths in nursing homes and long-term care facilities from the Chinese Communist Party (CCP) Virus. The order, signed by Cuomo on March 25, forced nursing homes to admit partially recovered COVID-19 patients without requiring a test to verify if they were virus-free.

“I wouldn’t do an investigation,” Cuomo said at a press conference, adding that “you’d have to be blind to realize it’s not political.”

Cuomo has repeatedly rejected links between the since-repealed policy and the 6,500 or so nursing home deaths in the state. A New York State Department of Health study (pdf) corroborated this stance, concluding that it was infected nursing home staff that fanned the spread.

New York Health Commissioner Dr. Howard Zucker said at a press conference following the release of a report that admission policies were not a significant factor in virus-related nursing home deaths, and called attempts to blame the fatalities on the March 25 executive order a “false narrative.”

However, questions have been raised about the reliability and impartiality of the study.

Rep. Steve Scalise (R-La.), who heads a House subcommittee on the COVID-19 crisis, said in a letter to Cuomo last month that besides “being dubious on its face, this conclusion was reached through a flawed methodology.”

Cuomo spokesman Rich Azzopardi pushed back against the claims in Scalise’s letter: “We’re used to Republicans denying science but now they are screeching about time, space and dates on a calendar to distract from the federal government’s many, many, embarrassing failures. No one is buying it.”

“This is a conflict of interest for the health department to investigate its own poor decisions,” State Assemblyman Ron Kim, a Democrat, said in early July. “For them to say that the decision of sending COVID-19 patients from hospitals into nursing did not contribute to increasing infections is ludicrous.”

Defending his administration’s policies on the virus, Cuomo pointed out the pandemic curve in terms of both new infections and new deaths has flattened.

“You look at where New York is as a percentage of nursing home deaths,” Cuomo also said. “It’s all the way at the bottom of the list of states.”

New York’s nursing home death toll could be 25 percent higher than the official tally, however, according to an analysis by the Foundation for Research on Equal Opportunity, a conservative think tank.

Meanwhile, Harvard University health care policy professor David Grabowski told NBC New York in an interview that he believes the March 25 directive fanned the flames of the outbreak in nursing homes but was probably not the main factor.