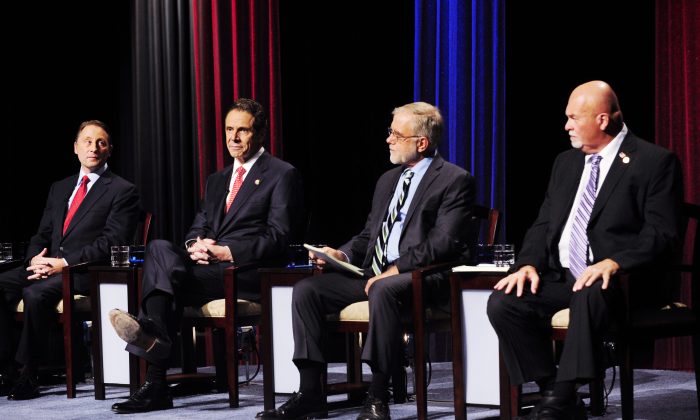 Cuomo on the Offensive in Sole Televised Debate

NEW YORK—The gloves were off for Gov. Andrew Cuomo Wednesday night, in the only televised debate he agreed to have with his Republican challenger Rob Astorino.

The governor repeatedly lashed out at Astorino on a wide range of issues, often violating the format of the debate by going off topic from the question asked by the moderator.

When the moderator asked Cuomo about his dissolution of the anti-corruption Moreland Commission, for which the governor has received widespread criticism, Cuomo instead talked about obscure legal charges against his opponent.

“[Astorino] has been charged with racketeering, which is being reviewed by the Manhattan District Attorney,” Cuomo said, referring to a lawsuit brought by the Westchester Independence Party, which has endorsed Cuomo in the the election.

“There’s only one person here with a criminal defense team, it’s not me, it’s Andrew Cuomo,” Astorino replied, referring to the Cuomo administration’s hiring of the lawyer Elkan Abramowitz in late July as counsel for U.S. Attorney Preet Bharara’s probe of the administration’s possible interference with the Moreland Commission.

Throughout the debate, Cuomo repeatedly insinuated that Astorino was racist against minorities for his stance on housing zoning policy as Westchester County Executive, which has cost the county $20 million via withheld funds from the federal government.

Cuomo has maintained a guarded ambivalence on the issue of fracking, and reiterated that he would defer to the recommendations of the state’s Commission of Health and Commission of Conservation.

“[Their report on fracking] is due at the end of this year, whatever the experts say, that is what I will do, it’s too complicated for a layman,” Cuomo said.

Astorino sought to capitalize on the comments that Bharara made earlier on Wednesday, when he called Albany a “corruption disaster.”

“Right now [Cuomo] is swimming in a cesspool of corruption, only in New York can the anti-corruption committee be corrupted,” Astorino said.

“It’s how he built his 45 million dollar war chest, which he uses to attack me in negative and false advertising,” Astorino said. “The governor gives out tax credits and a wink and a nod, and he gets very big contributions.”

When Cuomo implied that Astorino was a sexist for not being more supportive of abortion, the latter fired back at Cuomo’s role in the sexual harassment accusations against former state Assemblyman Vito Lopez.

“Shelly Silver [New York State Assembly speaker] who used $500,000 as hush money to cover up sexual assault in the assembly,” Astorino fired back. “Cuomo signed off on it, where was women’s justice then?”

Cuomo and Astorino engaged little with the minority party candidates, who mostly provided comedic relief for the audience.

“My daughter’s already planned to move into the governor’s mansion,” McDermott joked at one point.