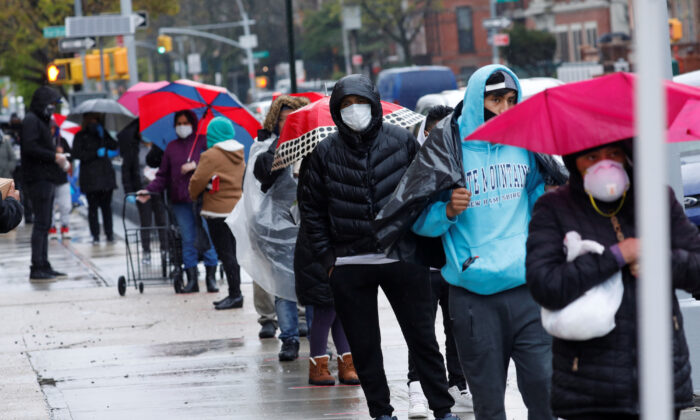 Cuomo on Medical Shortages: ‘You Can’t Be Dependent on China’
By Jack Phillips
Print

New York Gov. Andrew Cuomo said Sunday that the total number of CCP virus hospitalizations in the state has dropped below 10,000 for the first time in about two months, while noting that the pandemic has highlighted the country’s dependence on products manufactured in China, describing it as a security issue.

Cuomo said during his daily press conference that the number dropped to 9,786 after remaining above 10,000 for weeks.

“That may be just a reporting anomaly because this is over the weekend, and the weekend reporting tends to be a little different,” Cuomo said. “So I wouldn’t bet the farm on any of these specific one-day numbers, but the overall trend is good.”

Over the past 24 hours, 280 people have died across New York, Cuomo noted. On Friday, there were 299 fatalities.

Despite the drop in deaths and hospitalizations, the governor said the death toll so far is “tremendously distressing.”

“That number has not moved dramatically in a relatively long period of time, but the overall direction is good even though it’s very painful,” he said.

Cuomo, meanwhile, told reporters that the pandemic revealed serious security concerns in how the United States depends on China for necessary products.

The efforts to obtain masks from China are “inefficient and ineffective,” he said.

“That we have to go to China for the PPE? I mean think about that—you couldn’t even get it in this nation,” Cuomo said at the press briefing, referring to personal protective equipment such as gowns, masks, gloves, and other supplies. “We started making our own in this state.”

“That’s a national security issue to me,” he added. “You have to be able to get masks and gowns and whatever medical equipment you need so this nation can run a health-care system in the middle of an emergency.”

The United States cannot “be dependent on China to have the basic equipment to save lives in the United States, that’s what this came down to,” he said. The CCP (Chinese Communist Party) virus, a novel coronavirus, originated in mainland China late last year.

“We put together a de facto public health system,” the governor added. “We can’t go through this day to day in this mad scramble to move masks to where they were needed.”