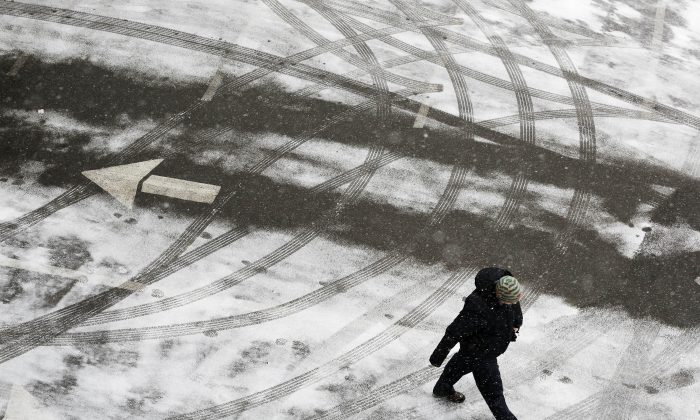 He says a storm-related travel ban will go into effect on all New York City-area roads at 11 p.m., along with a shutdown of the city’s subway system and commuter rails.

Cuomo says only emergency personnel will be allowed on roadways in 13 counties, including New York City and Long Island, after that point. Anyone else caught driving will get a summons for up to $300.

The governor says the ban is a safety precaution, to avoid potential dangerous situations of people getting stranded in their vehicles in the snow.

The subway system shutdown allows subway cars to be put away safely in places where they can be put back in service more quickly when the storm is over.

As the storm closed in, much of the region rushed to shut down. More than 5,800 flights in and out of the Northeast were canceled, and many of them may not take off again until Wednesday. Schools and businesses let out early. Government offices closed. Shoppers stocking up on food jammed supermarkets. Broadway stages went dark.

And cities mobilized snowplows and salt spreaders to deal with a dangerously windy blast that could instantly make up for what has been a largely snow-free winter in the urban Northeast.

All too aware that big snowstorms can make or break politicians, governors and mayors moved quickly to declare emergencies and order the shutdown of highways, streets and commuter railroads — perhaps for days — to prevent travelers from getting stranded and to enable plows and emergency vehicles to get through.

“It is not a regular storm,” New York Mayor Bill de Blasio warned in ordering city streets closed to all but emergency vehicles beginning at 11 p.m. “What you are going to see in a few hours is something that hits very hard and very fast.”