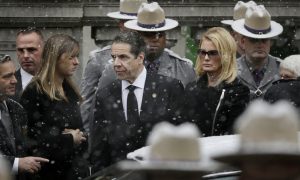 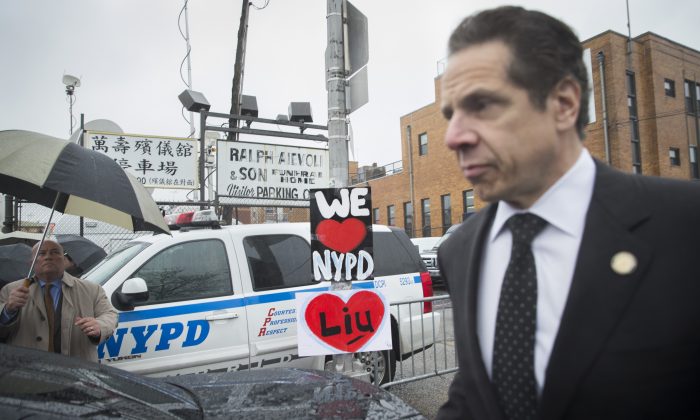 NEW YORK—Amid the hullaballoo of emotional protests, turned backs, and a work slowdown, Gov. Cuomo met with police union leaders Tuesday to discuss possible legislations. But black law enforcement organizations have not been invited to any talks.

“The majority of police unions are led by whites, and they rarely consult black police officers,” said Noel Leader, a retired NYPD sergeant and co-founder of an advocacy group called 100 Blacks in Law Enforcement Who Care.

Representatives of black law enforcement officers said it is problematic because they feel there is a fundamental issue of race not only within NYPD, but within the police unions.

In total, more than 1,300 black and Latino officers in the union have filed discrimination lawsuits against the NYPD, according to Leader. The police unions have not backed such lawsuits.

Police Commissioner William Bratton said there are no racial issues. Police tactics merely target high crime areas. Albeit the city paid $22.8 million to settle civil rights lawsuits against the NYPD in 2012, according to the city comptroller’s office.

According to black law enforcement organizations in New York, race should have been part of the conversation on Tuesday.

A spokeswoman for Gov. Andrew Cuomo said Tuesday’s meeting with union officials touched on a “range of issues” including a police discipline bill awaiting Cuomo’s action, and proposals to protect officers from violence.

But how productive were the talks? Damon Jones, local president of Blacks in Law Enforcement in America, thinks the discussions were not fruitful.

Even if Eric Garner’s grand jury records were to be released, it does not mitigate the situation, said Jones.

Though NYPD Officer Daniel Pantaleo used an illegal chokehold, he is not considered to have committed a crime under current law.

“The state gives them this power,” Jones said, suggesting it is even more important that Cuomo, of all politicians, talk to black law enforcement groups.

“But for Cuomo to meet with police unions, it just shows unions have a lot of money to lobby and give to politicians,” Jones said. “Cuomo hasn’t met with the family members of Akai Gurley or the Garner family.”

What Replacing Lynch Would Mean

What will happen if Patrick Lynch, president of the Patrolmen’s Benevolent Association that represents 23,000 rank-and-file officers, was to lose his position during the election in June?

Lynch, the leader of the opposition against de Blasio, is currently running unopposed for his fifth term. But there are talks of discord within the union and people seeking to replace him as many police members feel that the drawn out conflict with de Blasio was unnecessary.

Meanwhile, Leader is not hopeful that the issue of race will be addressed anytime soon. “In my opinion, there is no chance that an African-American or Latino will be elected president by any of the unions,” Leader said. “Very rarely do you have black officers on the precinct level.”