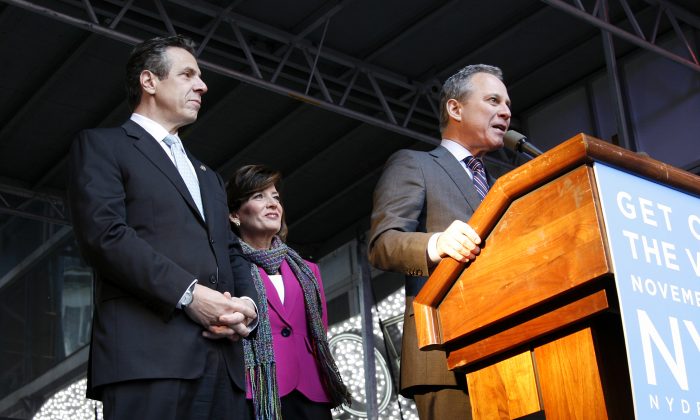 Cuomo Makes Final Push With Strong Rhetoric From the Left

In front of hundreds of labor union members in Times Square, Cuomo made statements about equality, “We believe in the collective…we believe in the sweetness of shared success.”

The rhetoric is shades more blue than those previously heard from the Democrat who is known for his budget balancing and stringent public safety policies—including the recent mandatory Ebola quarantine.

Cuomo will need those Democrat votes Tuesday, however. Concerns were raised when Cuomo defeated his lesser-known Democratic primary opponent Zephyr Teachout by only 62 percent to 34 percent. Onlookers had expected a landslide victory from Cuomo.

For Tuesday’s election, Cuomo’s opponent, Rob Astorino, Republican Westchester county executive, is once again someone unknown to many voters.

Cuomo needs to secure an overwhelming victory if he wants to fulfill his widely acknowledged presidential ambitions. To do that, he’s gathering the troops, rallying labor and minorities with forceful words.

His Times Square speech in particular was a far cry from the days when he criticized Teachout for being extremely progressive.

A poll published last Friday by Marist College predicted Cuomo would win 56 percent to Astorino’s 30 percent. It noted that voters had a good impression of Cuomo while more than a quarter of them didn’t know Astorino well.

In the week leading up to the election, Cuomo didn’t have much time to campaign. Caught up defending his controversial mandatory quarantine policy against Ebola, Cuomo held press conferences to explain—and repeat—himself.

He teamed up with New Jersey Gov. Chris Christie, a Republican, to announce the stringent policy on Oct. 24, which requires mandatory quarantine for most medical professionals traveling into the two states from West Africa.

A day earlier, Dr. Craig Spencer, who had volunteered with Doctors Without Borders in West Africa, had fallen ill to Ebola and self-quarantined in his Washington Heights apartment.

He drew concern from New Yorkers when they heard he had visited a bowling alley, a meatball shop, and rode several trains the day before his fever rose.

The mandatory quarantine policy has attracted criticism from scientists and the White House for possibly deterring professionals from volunteering to help stop the Ebola epidemic.

Such a storm of censure has led some experts to speculate on the effects to Cuomo’s popularity with voters, but according to the Marist poll, many New Yorkers approve of the mandatory quarantine.

Most New Yorkers, 82 percent, would like a forced quarantine for anyone who has touched an Ebola patient.

Meanwhile, Astorino is not a fan of Cuomo’s policy, as he believes it doesn’t go far enough.

The 47-year-old wants to reject those flying in from Ebola-ravaged countries to John F. Kennedy Airport. He called letting in travelers from those nations “sheer and utter madness,” according to a press statement.

Cuomo has said that a flight ban is up to the federal government.

Sixty-three percent of New Yorkers approve of how Cuomo has handled Ebola in New York, while 57 percent support a flight ban.

Prominent New York Democrats reacted violently when they heard Astorino’s supporter, Republican Assemblyman Steve McLaughlin comment on Saturday that “I think personally New York City, as lazy as they are, they’re not going to show up to vote.”

McLaughlin’s comment was about how the Republicans could rely on upstate support, according to Capital New York. But all context has been dropped as a host of personalities, from Christie Quinn to City Council Speaker Melissa Mark-Viverito, decried Astorino’s bad manners, Sunday.

“We’ve been campaigning all over New York City in all five boroughs,” she said, “Which is more than we can say of Mr. Cuomo.”

Still, Cuomo didn’t miss the chance to take a crack at Astorino at Monday’s rally—and a chance to slip in more left-leaning words.

“They say we’re lazy,” said Cuomo, “You show them the biggest vote in history, by getting your vote…and your neighbor’s vote.”