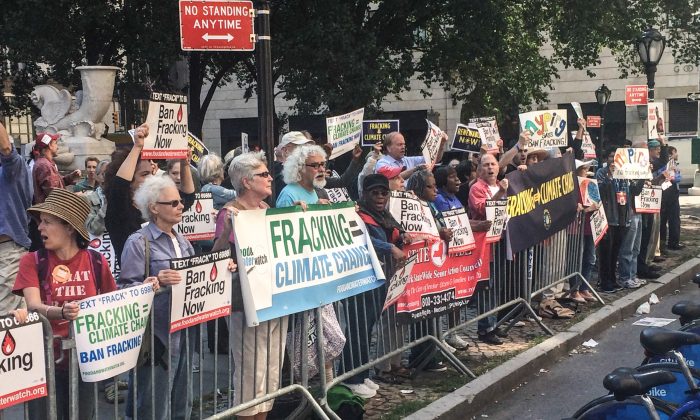 Anti-fracking activists protest across the street from the Plaza Hotel, where Cuomo was hosting a campaign event and luncheon in Midtown Manhattan, N.Y., on Monday, September 18, 2014. (Jonathan Zhou/Epoch Times)
New York

Cuomo: I Won’t Decide on Fracking Before the Election

NEW YORK—Gov. Andrew Cuomo reiterated Thursday that he would not make a decision on fracking before the election, again rebuking activists who have repeatedly entreated the governor to ban fracking.

“No, there won’t be,” Cuomo told reporters at a press event at the Plaza Hotel, on whether he would make a decision about extending the state’s moratorium on hydraulic fracturing before Nov. 7.

New York instituted a nonstatutory ban on the controversial oil and natural gas extraction method in 2008, in order to study its effects on the environment. New York’s environmental commissioner could permit fracking as early as April 2015, according to a Bloomberg report.

Across the street from the hotel, scores of fracking activists were protesting Cuomo’s indecision, holding posters and chanting slogans against fracking.

“We always have the fracking groups outside, some things are constant,” Cuomo said, referring to the persistence of the anti-fracking movement, which has held protests at his visit to SUNY New Paltz and his fundraiser in Webster, Monroe County, just this week.

“We’ve followed Cuomo around everywhere he’s been for a couple of years actually, urging him to ban fracking,” said Alex Beauchamp of Food & Water Watch.

“You’re going to continue to see that over the fall and throughout his career until he protects New Yorkers’ health and safety by banning fracking across the state.”

Only 29 percent of New Yorkers support fracking, and 42 percent say that fracking poses a major risk to the state’s water resources, according to a University of Michigan poll conducted this spring. But the issue remains arcane for most, with only 44 percent saying that they were “very aware” or “somewhat aware” of fracking.

Zephyr Teachout won nearly 40 percent of the vote against Cuomo in the Democratic primary on a platform that included strident opposition to fracking, but there’s little chance of the governor losing votes over the issue in the general election. His opponent Rob Astorino has been a vocal support of fracking, calling it an engine of economic growth, whereas Cuomo has always been equivocal.

“He continues to say he’ll let the science decide. The science however, is really clear, we’re learning more and more about the dangers of fracking everyday, the science clearly compels a ban,” said Beauchamp. “The question is whether Cuomo will listen to it.”