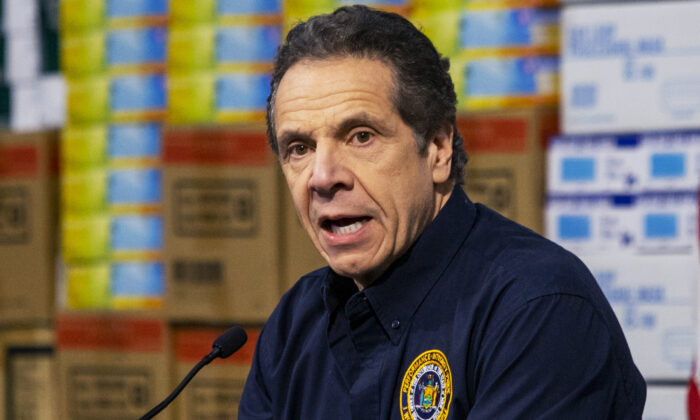 New York Gov. Andrew Cuomo speaks to the media at the Javits Convention Center which is being turned into a hospital to help fight coronavirus cases, in New York City on March 24, 2020. (Eduardo Munoz Alvarez/Getty Images)
By Tom Ozimek

Speaking on March 26, Cuomo said the economic toll of the CCP virus outbreak will be dramatic in New York and castigated federal officials for what he called a failure to address lost revenue in the relief package.

“I’m disappointed,” Cuomo said during the televised news conference. “I find it irresponsible. I find it reckless. Emotion is a luxury. And we don’t have the luxury at this time of being emotional about what they [Congress] did. When this is over, I promise you I’m going to give them a piece of my mind.”

Cuomo said the outbreak creates a “double whammy” of increased state costs and lost revenue as businesses shutter and workers are laid off.

“The congressional action, in my opinion, simply failed to address the governmental need,” Cuomo said, according to The Associated Press.

While the relief plan before Congress would send $5 billion for COVID-19-related expenses, Cuomo said the larger issue is lost revenue.

“This was the time [for Congress] to put politics aside,” Cuomo said. “Now is a time to actually step up, do the right thing, and do your job. And they haven’t as far as I’m concerned, especially when it comes to the governmental need.”

The governor said the state will have to adjust its budget plan for the fiscal year beginning April 1, because revenue figures are so uncertain.

The relief package is intended to flood the country with cash in a bid to stem the crushing effects on the U.S. economy of an intensifying epidemic that has killed more than 1,000 people in the United States and infected at least 79,000. It follows two other measures that became law this month.

The money at stake amounts to nearly half of the total $4.7 trillion the U.S. government spends annually.

President Donald Trump, who has promised to sign the bill as soon as it passes the House, expressed approval on Twitter.

“96-0 in the United States Senate. Congratulations AMERICA!” he wrote.

New York has become the nation’s epicenter of the pandemic, with more than 37,000 New Yorkers diagnosed with the respiratory illness, and 385 deaths.

Cuomo said that number is expected to rise.

“That is a situation where people just deteriorate over time,” Cuomo said. “And that is what we’re seeing.”

He added that under almost any COVID-19 scenario, hospitals would be overwhelmed.

“Almost any scenario that is realistic will overwhelm the capacity of the current health care system. So, a little reality, keep the curve down as low as you can, but you cannot get the curve down low enough so that you don’t overwhelm the hospital capacity,” Cuomo said.

He spoke of the imperative to increase hospital capacity.

“Our goal is to have a 1,000-plus overflow facility in each of the boroughs downstate in the counties,” he said, adding that New York was performing 25 percent of the COVID-19 testing nationwide.

Speaking about the urgent need for medical equipment, Cuomo said the demands on ventilators by the COVID-19 disease are greater than for many other illnesses.

For most people, COVID-19 causes mild or moderate symptoms, such as fever and cough, that clear up in two to three weeks. For some, especially older adults and people with existing health problems, it can cause more severe illness, including pneumonia and death.

Globally, more than 122,000 people have recovered from the virus, according to a running count kept by Johns Hopkins University.