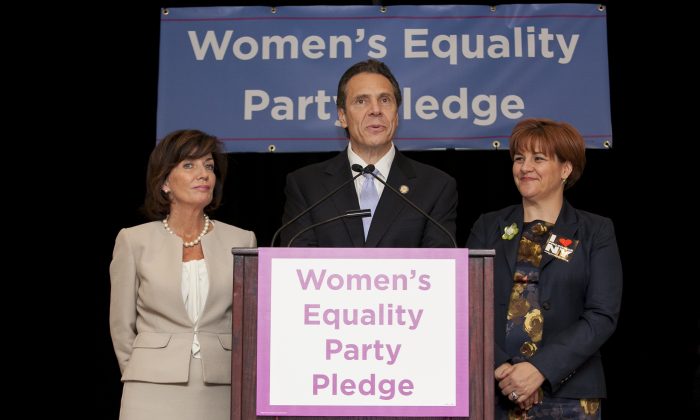 The pledge is a reiteration of Cuomo’s 2013 Women’s Equality Act, which failed to pass because Senate Republicans had problems with a plank in the bill expanding access to late-term abortions.

“Roe v. Wade is the law of the land,” Cuomo told reporters at the announcement. “We want a state statute that codifies Roe v. Wade. Why? In the case the Supreme Court changes its mind, we want in our state law protection for a woman’s right to choose.”

When asked about how the pledge concerns controversial late-term abortions, Cuomo deflected the question and reiterated that the pledge would only ask for support enshrining Roe vs. Wade in state law.

“There were people who found every point [in the pledge] controversial,” Cuomo replied. “It just codifies the existing law and practice of Roe. v. Wade.”

The pledge is part of the platform of the Women’s Equality Party, which was formed by state Democrats to utilize the state’s fusion voting system, where a single candidate can appear on multiple party lines in the general election and pool those votes together.

“We all know the history of the women’s rights movement in the state of New York from Seneca Falls to today, but today we need to protect and preserve that legacy, we need to know that that legacy is under attack all across America,” said Hochul, whom Cuomo touted as someone who would become the first Democratic female lieutenant governor in 35 years.

The last two female lieutenant governors in the state of New York were Mary Donohue and Elizabeth Ross, both Republicans who ran with George Pataki.

Cuomo downplayed the role the pledge will play in the governor’s race, stressing that the main purpose of the Women’s Equality Party was to canvass and consolidate voters’ support for specific legislation.

“[The pledge is not directed at Rob Astorino] because he’s not a member of the legislature who didn’t support the Women’s Equality Act,” Cuomo said.

“Our MO is very much to demonstrate the political support and then go to the legislature and say ‘we want you to support this.'”

“One of the ways to demonstrate it is to get a vote on that line, which we’ll say to the legislature “we’re serious, we count, and you can count our numbers because we just formed a party,” he continued.

A full list of the 10-point pledge can be found on www.womensequalityparty.com