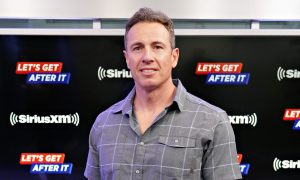 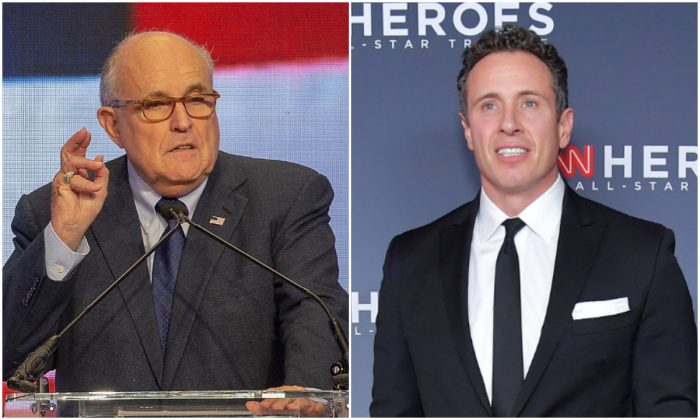 A one-on-one interview between CNN’s Chris Cuomo and President Donald Trump’s attorney, Rudy Giuliani, this week got heated as they clashed over an anonymous whistleblower complaint allegedly involving the president and Ukraine.

The 28-minute exchange on Sept. 19 saw Giuliani call the CNN host a “sellout,” and “totally biased” as they discussed whether the lawyer asked Ukraine to investigate former Vice President Joe Biden.

Cuomo argued that the fact he was interviewing Giuliani on the show was proof the channel wasn’t biased.

The pair clashed after Giuliani initially denied asking for an investigation into Biden, then responding “of course I did,” moments later.

“I found out this incredible story about Joe Biden, that he bribed the president of the Ukraine (sic) in order to fire a prosecutor who was investigating his son,” Giuliani told host Cuomo.

Cuomo then questioned the attorney as to whether he asked for an investigation.

“No, actually I didn’t,” Giuliani fired back. “I asked the Ukraine to investigate the allegations that there was interference in the election of 2016 by the Ukrainians for the benefit of Hillary Clinton—”

Giuliani responded that he wanted to figure out how and why the prosecutor who was to look into Biden dropped the case against the former vice president.

“So you did ask Ukraine to look into Joe Biden,” Cuomo asked, to which Giuliani responded, “Of course I did.”

Later, when Cuomo told Giuliani their conversation was veering off track when he started to mention Biden’s his son and China, the attorney called him “unfair.”

“It’s unfair for me not to want to tolerate you talking about Joe Biden all night long when we have an inspector general fighting with the DNI, fighting with Congress over a whistleblower complaint that involves this president and you and what you’ve been doing playing with Ukraine?” Cuomo asked.

Giuliani fired back, “We have an anonymous whistleblower complaint compared to clear proof that Biden’s son got $1.5 billion from China, and you won’t cover it. Tell me you’re not unfair.”

“That’s why your network has no ratings,” he added.

Cuomo hit back at Giuliani, claiming that he was distracting people from the truth on behalf of Trump, saying that “this president got the benefit of something you built up for decades, your credibility, and you put it on the line for him. Good choice.”

“I put it on the line for him 1,000 percent,” Giuliani replied, calling the network “a horror to this country.”

And when the CNN host asked for proof, the former New York City mayor to asked, “Why would I give the enemy the documents?”

Giuliani later called CNN “the enemy” when he asked for proof once again.

“You are not fair and impartial. You are totally biased and your network is a creature of a Democratic National Committee,” he added, as the interview drew to a close.

Giuliani’s CNN appearance came as tensions grew over reports that said Trump made an unspecified “promise” to a foreign leader, which reportedly prompted an unidentified official within the intelligence community to file a whistleblower complaint.

The details of the complaint were reported by The Washington Post late on Sept. 18, but specifics as to who the conversation was with or what was said still aren’t known. The Post cited two unidentified U.S. officials.

Trump took to social media to weigh in on the Post’s reporting, calling it “fake news” and denying accusations that he would “say something inappropriate with a foreign leader.”

“Another Fake News story out there—It never ends! Virtually anytime I speak on the phone to a foreign leader, I understand that there may be many people listening from various U.S. agencies, not to mention those from the other country itself. No problem!” Trump wrote on Sept. 19.

Another Fake News story out there – It never ends! Virtually anytime I speak on the phone to a foreign leader, I understand that there may be many people listening from various U.S. agencies, not to mention those from the other country itself. No problem!