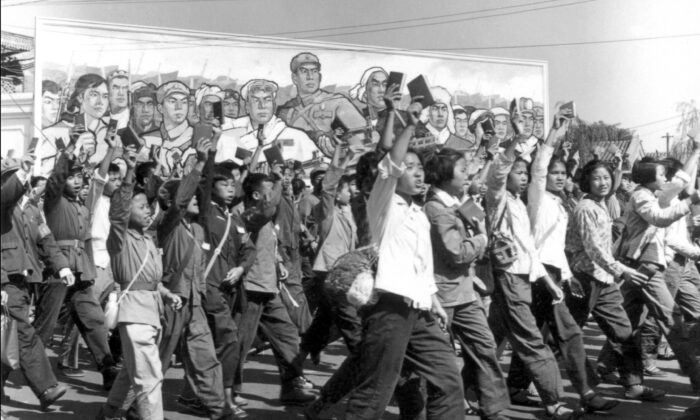 Red Guard members wave copies of Chairman Mao’s “Little Red Book” during a parade in Beijing in June 1966. Young people are easily manipulated, and when they act in concert for what they believe are good causes, those causes often end up in disaster and mass violence. (Jean Vincent/AFP via Getty Images)
Viewpoints

Part 1: The start of the Cultural Revolution in China

This is part 1 in a series observing similarities between China’s Cultural Revolution and the United States today. (See part 2 and part 3.)

Rage mobs can greatly change a country in just a few months. Much of their power is based on their victims being unable to fight back. While China in 1966 was very different from today’s United States, the Cultural Revolutions of China 1966 and America 2020 do have much in common.

China’s Cultural Revolution was launched by Communist Party Chairman Mao Zedong, ruler of China. Mao’s objective was to destroy everything and everyone limiting the direct imposition of his will on the Chinese people.

Mao Zedong had become dictator of China in 1949, after leading the communists to victory in a war against the Nationalist government. A decade and a half later, Mao recognized that the revolution was incomplete: The communists had killed, enslaved, or ruined their class enemies, such as small businessmen or small landowners. Yet by the mid-1960s, it was clear that extirpating the bourgeoise had not killed “bourgeois” ideas—such as free labor, free exchange, and free thought.

Even within the Chinese Communist Party (CCP), there were high-ranking “revisionists.” They secretly thought that the Soviet Union’s post-Stalin version of communism, introduced by Nikita Khrushchev, was more practical than Stalin’s and Mao’s. Khrushchevism was totalitarian, but compared to Maoism, it was more stable and bureaucratic, and much less inclined to attempt unrealistic programs. Obedient people were allowed more autonomy over small matters in their daily lives.

The warmup to the Cultural Revolution began in 1963, with attacks on classical Chinese opera. In China, opera has always been popular with people of all educational levels. Mao’s fourth wife, a Shanghai actress known as “Madame Mao,” led campaigns denouncing pre-1949 operas for political incorrectness.

By the time she was done, fine arts performances were limited to five operas, two ballets, and one symphony. Notwithstanding innovations such as ballerinas en pointe with Kalashnikov rifles, the post-1949 “model” works were crude propaganda.

Some people may have thought that political correctness was just a problem for the opera. Not for long.

The major problem, in Mao’s view, was that people were not fully thinking like socialists. “Dead people are still in control of literature and the arts,” Mao complained to his personal doctor in 1963. According to Dr. Li Zhisui’s memoir, Mao was angry that Party members were “promoting feudal and capitalist art but ignoring socialist art.”

Playwrights and other intellectuals were targeted. The most-vilified playwright had previously been praised by Mao himself for the 1961 opera “Hai Rui Dismissed from Office” (or “Dismissal of Hai Jui from Official Post”). The story was based on a 1565 historical hero who was imprisoned because he told the Ming emperor that the emperor was out of touch with the people and didn’t recognize their suffering.

There’s a long Chinese literary tradition of “pointing at the mulberry and reviling the ash”—in other words, indirectly criticizing A by criticizing B. Mao apparently realized that he was seen as more like the incompetent and self-centered emperor and not as the brave and honest civil servant.

Mao’s objective in the Cultural Revolution was to overthrow the CCP itself, which had always been closely tied to the military (the People’s Liberation Army, PLA). He knew that the majority of the Politburo was against his plans, and so were most of the provincial and local CCP committees. So Mao realized he needed the PLA’s backing. Fortunately for Mao, defense minister Lin Biao was absolutely subservient to him.

Mao’s top target in the Cultural Revolution was the CCP’s second-highest official, Liu Shaoqi. At a 1962 Communist Party conference, Liu had earned a standing ovation for bravely denouncing the famine caused by Mao’s “Great Leap Forward” as a “man-made disaster.” The speech put an end to Mao’s claims that the worst famine in human history was just the result of bad weather.

Likewise targeted by the Cultural Revolution was Deng Xiaoping, who had also objected to the excesses of the Great Leap Forward, although in a more circumspect manner than Liu. “Why did Liu, Deng, and their followers in the Party Center allow such blatant political manipulation against them without objecting? The answer was military intimidation,” wrote historian Fang Zhu, in “Gun Barrel Politics: Party-Army Relations in Mao’s China.”

Shortly before the launch of the Cultural Revolution, troops loyal to Lin were moved into Beijing, encircling the city. Commando units took over media offices, such as radio stations and the People’s Daily, which was the only general circulation national newspaper allowed to exist, and which was the main way that the CCP’s orders were transmitted to the population.

Additionally, troops under the command of Mao’s personal bodyguard were sent to surveil (or, supposedly, protect) the homes of all high-ranking officials in the CCP leadership compound. According to Zhu, “Mao and Lin would not have been able to prevail, at least not so easily, without the threat of force against their opposition in the party leadership.”

To start the “Great Proletarian Cultural Revolution,” Mao used the most privileged youths in China. Mao had won the war in 1949 in part by promising to abolish the old class system, and he had done so. Rather than creating a classless society (the purported goal of communism), Mao had instead established a new class of inherited rank.

Everyone was color-coded. The top class were those who had fought in the revolution and belonged to the party. They and their descendants were “red.” The lowest new class was colored black. It consisted of the former “bourgeoise” and “landlords”—not just the middle class and large landowners, but also peasants or vendors who had made small profits before the revolution. The black class also included persons who once had a minor relation with the former government, such as a clerk in government office. In between was the white class—apolitical peasants, urban factory workers, and so on.

In the class system, class was inherited. If your parents were red, so were you; if your parents had been black, you were forever black. Interclass marriage was forbidden in 1950.

The class system was not perfectly stable, especially in a relentless atmosphere of purges and accusations. For example, in the 1930s and 1940s, some loyal communists had been ordered by the CCP to infiltrate Nationalist labor unions by posing as Nationalists. Considering the risks they took, they should have been impeccably red. But during the Cultural Revolution, as everyone was looking for reasons to denounce everyone else, the old labor union records of the former spies were dug up, and they were persecuted for supposedly being collaborators with the Nationalists.

More generally, there were always propaganda campaigns against the Four Types: former landlords; former rich peasants (e.g., a small family business); counterrevolutionaries (non-communists); and bad elements (persons who deviated from the CCP orthodoxy of the moment). The first two types were straightforwardly black bloods; the latter two “types” were sufficiently elastic that almost anyone could be accused. Being securely recognized as a good red one day did not necessarily protect individuals and their relatives from being reclassified another day and then murdered or sent to a slave labor camp.

The top schools were mainly for the children of the red class. The students at these schools received military training, starting in elementary school by shooting air guns at pictures of Chiang Kai-Shek and Americans, then progressing to rifles in secondary school. (Chiang was the defeated head of the Nationalist government, but he still ruled the island of Taiwan, and claimed to be the legitimate ruler of China.)

The Cultural Revolution began in earnest at Beijing’s top school for the children of Chinese Communist Party élite. At schools in general, pureblood students resented the students of lower-class blood; having no class advantage, the lower-class students tended to work harder and thereby outperform their social betters.

As historian Frank Dikötter recounts in his book “The Cultural Revolution: A People’s History,” by the first half of 1966, politically correct students realized that something was up, as they read between the lines of articles in the People’s Daily. So the students began scouring libraries “and soon problems were discovered with short stories, novels, movies and plays. … Posters appeared questioning the background of some teachers.”

The Cultural Revolution was publicly declared on June 1, 1966, with a People’s Daily editorial telling the people to “sweep away all ox-ghosts and snake spirits” (also translated as “monsters and demons” or “freaks and monsters”).

Classes were cancelled at schools nationwide so that students could attack their teachers. The next day, Nie Yuanzi’s big character poster was reprinted in the People’s Daily, accompanied by an editorial urging people to “oppose, beat, and thoroughly destroy” revisionists.

Students were encouraged to put up big character posters denouncing teachers for revisionist thinking. “Revisionist” meant thinking like Khrushchev or anyone else who deviated from pure communist totalitarianism: all life must be political; only one political line is allowed. Often, “revisionist” was just a label for persecuting anyone, including sincere ultra-Maoists.

Student mobs beat and humiliated their teachers. Many used improvised weapons, fencing swords, or javelins. Fearful, the teachers began to denounce each other, since teachers know much more about each other than students do.