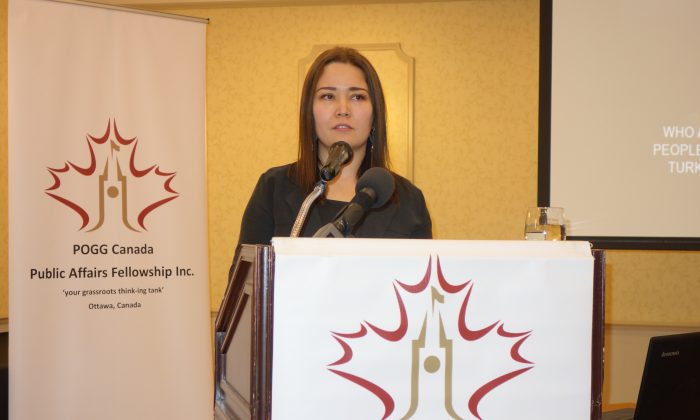 The detention and abuse of Uighur Muslims in China’s Xinjiang region has accelerated to become a cultural genocide and will likely, if it hasn’t already, become an actual genocide , says a Uighur activist in Canada.

Rukiye Turdush says the Uighur culture is actively being stamped out by the Chinese government, and Uighurs in the Xinjiang live under constant surveillance. The Chinese regime has claimed that its de-radicalization program is intended to crack down on extremists in the Xinjiang region.

Some reports indicate that over one million Uighurs from the Xinjiang region are being held in so-called re-education camps, where they are forced to deny their faith and pledge allegiance to the Chinese Communist Party. Speaking at an event held by Peace, Order, and Good Governance Canada (POGG), Turdush said she is convinced the situation in Xinjiang will only get worse.

Turdush says Uighurs in camps face physical and psychological torture, as well as death. Only a few witnesses of the abuse at the camps exist, but one Uighur woman with an Egyptian passport who was able to escape she gave testimony last year to the U.S. Congress about the atrocities she witnessed there.

Speaking in front of the congressional-executive commission on China, Mihrigul Tursun said she had been taken to a Chinese government detention centre multiple times. The first time, she was released because one of her three-month-old triplets had died while in the custody of the authorities.

The second time she was interned there, Tursun said she was tortured. She said she was interrogated for four days while not allowed to sleep, was tied up on a tiger chair, and after a few months began to have seizures.

“I thought I would rather die than go through this torture. I begged them to kill me,” she said in her statement. “They told me my mother and son had died, that my father was serving life in prison, and that my family was torn apart because of me.”

Tursun also said she witnessed nine deaths in three months while in her cell of 68 people.

U.N. Human Rights Chief Michelle Bachelet said earlier this month that she is seeking access to China to verify reports of disappearances and arbitrary detentions in the Xinjiang region.

A speech critical of the Chinese regime’s treatment of Uighurs given by Turdush at McMaster last month was disrupted by filming and shouting from Chinese students in what Turdush says was an attempt by Beijing to suppress her message.

In a joint statement released by the students who interrupted her, they said that all nationalities in China are happy and living in harmony.

“How could they live in harmony?” Turdush said. “This has become a police state right now.”

She said WeChat messages show that the Chinese students were instructed by someone, and believes that someone was from the Chinese consulate. However, she said she doesn’t have explicit proof it was a Chinese official.

Canadian Magnitsky lists have the names of human rights violators who are not welcome in Canada, and Brock University’s Professor Charles Burton finds it interesting that there aren’t any Chinese officials on that list.

“Why is there no Chinese name on that list when we have such an awareness of very, very serious crimes against humanity that are going on in the Western part of China now?” he said in a speech at the POGG conference.

There is also a question of Chinese political influence in Canada. China has 166 officially recognized diplomatic representatives in Canada, which is more than any other country in the world. By comparison, the United States has 149 representatives, yet America is by far Canada’s largest partner in trade and culture. Burton wonders why there are so many Chinese representatives here.

“You wonder how many of the large number of Chinese diplomats in Canada are actually carrying out the mandate of the Chinese Communist Party’s united front work department to promote Chinese political influence in Canada,” the professor said. “And, you know, we don’t know.”

Burton noted that one of Prime Minister Justin Trudeau’s goals has been to foster greater trade with China, at least until Beijing detained Canadians Michael Kovrig and Michael Spavor last December.

“In retrospect, we can see Canada’s approach to China until the detention of the two Canadians has become seriously dysfunctional,” Burton said.

“It amounted to a foreign policy designed to serve the interests of Canadian business and government elite, emphasizing the promotion of prosperity of Canada over everything else.”

Beijing has accused Kovrig and Spavor of stealing state secrets, but it is widely believed that they were detained in retaliation for Canada’s arrest of Huawei executive Meng Wanzhou on behalf of the United States, where she faces charges of fraud.

“I think China will continue to give us pushback, hoping that somehow this will result in Ms. Meng Wanzhou, the CFO of Huawei, being returned to Beijing,” Burton says.