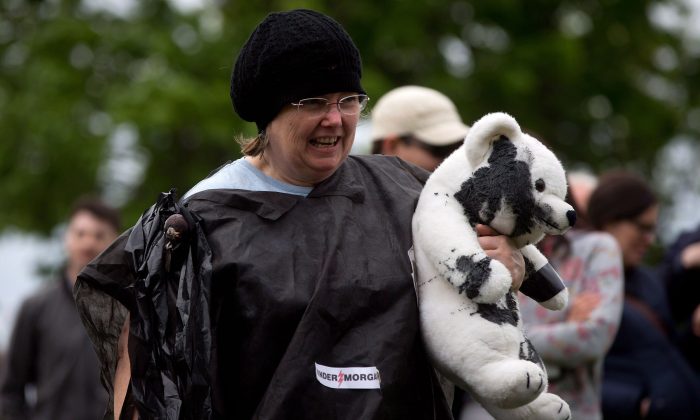 A woman holds a stuffed polar bear painted black to simulate oil during a protest against the Enbridge Northern Gateway Pipeline in Vancouver on May 10. NDP MP Nathan Cullen has introduced a bill that would ban tanker traffic in the areas of Dixon Entrance, Hecate Strait, and Queen Charlotte Sound. (The Canadian Press/Darryl Dyck)
Canada

Cullen Seeks to Ban Tanker Traffic on BC Coast

The first debate on a bill that would ban tanker traffic on parts of British Columbia’s coast took place this week, with its sponsor telling the House of Commons that if the bill passes, it would end an issue that has been debated for decades.

“This in fact has been a generational debate,” Nathan Cullen, NDP MP for Skeena-Bulkely Valley, told the House on Tuesday, Dec. 2.

“Many in this place will not know that we have been debating supertanker bans off the north coast of British Columbia for 42 years in the House of Commons. The House passed a motion by one of my predecessors, Frank Howard, 42 years ago, to do this very thing.”

Bill C-628, “An Act to amend the Canada Shipping Act, 2001 and the National Energy Board Act (oil transportation and pipeline certificate),” would ban tanker traffic in the areas of Dixon Entrance, Hecate Strait, and Queen Charlotte Sound.

Cullen’s legislation would create an exemption on the transportation of gasoline, aviation fuel, diesel oil, or fuel oil destined for coastal communities. The bill also includes a requirement for the National Energy Board to consult with municipalities, provinces, territories, and First Nations, as well as author reports summarizing views.

Earlier this year, the government announced that it would be updating its responses to oil spills in four areas: the southern portion of British Columbia; Saint John and the Bay of Fundy in New Brunswick; Port Hawkesbury, Nova Scotia; and the Gulf of St. Lawrence in Quebec.

A number of local municipalities have voted in favour of motions to ban tankers in their areas. Those include West Vancouver Council and Vancouver’s city council. Meanwhile, 130 First Nations have also signed a declaration, the Fraser Declaration, opposing the oil tankers.

“It seeks to deepen and broaden community consultations whenever the Government of Canada addresses the Canadian people about important projects like pipelines and mines and anything that might have an impact on our communities and our homes.”

In 2010, the House adopted an NDP motion, also proposed by Cullen, calling for a ban of the transportation of crude oil off the north coast of B.C. The same year, Liberal MP Joyce Murray (Vancouver Quadra) introduced a similar bill, C-437.

“I am pleased to support the bill, which is modelled after my own bills, both Bill C-437 as well as Bill C-606 from a previous Parliament. I had the privilege of being in the order of precedence in 2011.”