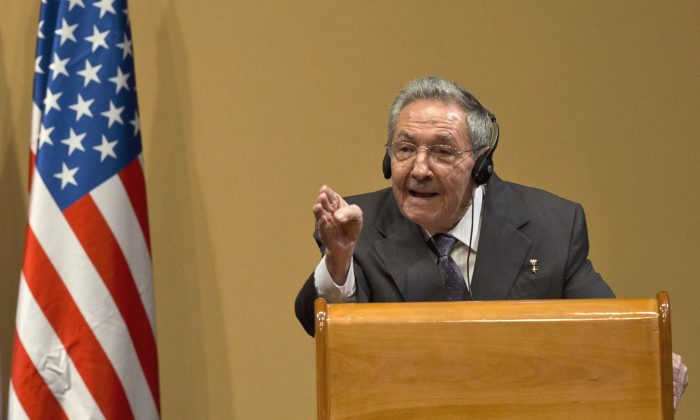 Cuba's President Raul Castro gestures as he speaks during a press conference after a joint statement with US President Barack Obama in Havana, Cuba, Monday, March 21, 2016. (AP Photo/Ramon Espinosa)
Americas

HAVANA—Laying bare a half-century of tensions, President Barack Obama and Cuban President Raul Castro prodded each other Monday over human rights and the longstanding U.S. economic embargo during an unprecedented joint news conference that stunned Cubans unaccustomed to their leaders being aggressively questioned.

The exchanges underscored deep divisions that still exist between the two countries despite rapidly improved relations in the 15 months since Obama and Castro surprised the world with an announcement to end their Cold War-era diplomatic freeze.

Obama, standing in Havana’s Palace of the Revolution on the second day of his historic visit to Cuba, repeatedly pushed Castroto take steps to address his country’s human rights record.

“We continue, as President Castro indicated, to have some very serious differences, including on democracy and human rights,” said Obama, who planned to meet with Cuban dissidents Tuesday. Still, Obama heralded a “new day” in the U.S.-Cuba relationship and said “part of normalizing relations means we discuss these differences directly.”

Castro was blistering in his criticism of the American embargo, which he called “the most important obstacle” to his country’s economic development. He also pressed Obama to return the Guantanamo detention center, which is on the island of Cuba, to his government.

“There are profound differences between our countries that will not go away,” Castro said plainly.

White House officials spent weeks pushing their Cuban counterparts to agree for the leaders to take questions from reporters after their private meeting, reaching agreement just hours before Obama and Castro appeared before cameras. It’s extremely rare for Castro to give a press conference, though he has sometimes taken questions from reporters spontaneously when the mood strikes.

While the issue of political prisoners is hugely important to Cuban-Americans and the international community, most people on the island are more concerned about the shortage of goods and their struggles with local bureaucracy.

Castro appeared agitated at times during the questioning, professing to not understand whether inquiries were directed to him.

But when an American reporter asked about political prisoners in Cuba, he pushed back aggressively, saying if the journalist could offer names of anyone improperly imprisoned, “they will be released before tonight ends.”

“What political prisoners? Give me a name or names,” Castro said.

Cuba has been criticized for briefly detaining demonstrators thousands of times a year but has drastically reduced its practice of handing down long prison sentences for crimes human rights groups consider to be political. Cuba released dozens of prisoners as part of its deal to normalize relations with the U.S., and in a recent report, Amnesty International did not name any current prisoners of conscience in Cuba.

But Ben Rhodes, Obama’s deputy national security adviser, says the U.S. regularly raises cases of specific political prisoners and that many of the cases have been resolved. But he says Cuba insists that they don’t consider them political prisoners. He says the Cuban authorities reply that the prisoners are being held for different crimes.

“I’ve shared many lists with the Cuban government,” Rhodes said.

Rhodes comments come after Cuban President Raul Castro said during a press conference that if he were brought a list of political prisoners, “they will be released before tonight ends.”

Obama’s and Castro’s comments were broadcast live on state television, which is tightly controlled by the government and the Communist Party.

At an outdoor cafe in Havana, about a dozen Cubans and tourists watched in awed silence. One woman held her hand to her mouth in shock.

“It’s very significant to hear this from our president, for him to recognize that not all human rights are respected in Cuba,” saidRaul Rios, a 47-year-old driver.

Ricardo Herrera, a 45-year-old street food vendor said, “It’s like a movie but based on real life.”

After responding to a handful of questions, Castro ended the news conference abruptly, declaring, “I think this is enough.”

Obama then appeared to lean in to pat Castro on the back. In an awkward moment, the Cuban leader instead grabbed Obama’s arm and lifted it up as the U.S. president’s wrist dangled, an image that immediately grabbed attention on social media.

White House officials said Obama did not plan to meet with Fidel Castro, the older brother of the Cuban president and his predecessor in office, hoping to keep the visit focused on the future of the island. Rhodes, the White House adviser, said there were also other considerations, including Castro’s “health issues.”

Obama, in an interview with ABC News, said he has no problem with such a meeting “just as a symbol of the end of this Cold War chapter.”

Obama’s visit to Cuba is a crowning moment in his and Raul Castro’s bid to normalize ties between two countries that sit just 90 miles apart. The U.S. leader traveled with his family and was taking in the sights in Old Havana and attending a baseball game between the beloved Cuban national team and the Tampa Bay Rays of America’s American League.

Several American business leaders joined Obama on the trip, many eager to gain a foothold on the island nation. Technology giant Google announced plans to open a cutting-edge online technology center offering free Internet at speeds nearly 70 times faster than those now available to the Cuban public. Obama said Google’s efforts in Cuba are part of a wider plan to improve access to the Internet across the island.

While Castro has welcomed increased economic ties, he insisted his country would still suffer as long as the American economic embargo was in place. Obama has called on Congress to lift the blockade, but lawmakers have not held a vote on the repeal.

Obama’s visit is being closely watched in the United States, where public opinion has shifted in support of normalized relations with Cuba. Still, many Republicans — including some hoping to succeed Obama as president — have vowed to roll back the diplomatic opening if elected.

Castro was asked by an American reporter whether he favored the election of Republican front-runner Donald Trump or likely Democratic nominee Hillary Clinton.

Castro smiled and said simply, “I cannot vote in the United States.”