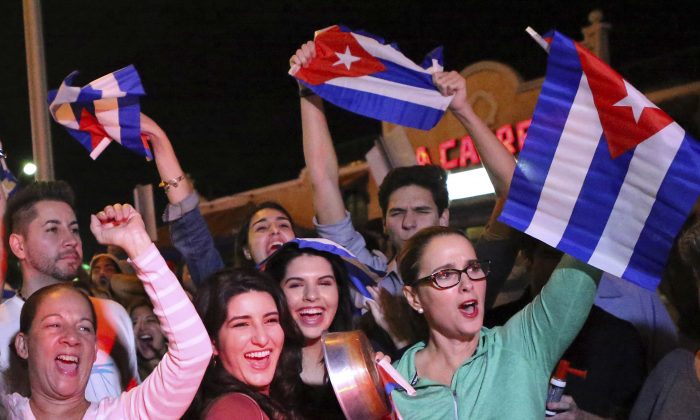 In this file photo, the Cuban community in Miami celebrates the announcement that Fidel Castro died in front La Carreta Restaurant early in Miami on Nov. 25, 2016. (David Santiago)
US

MIAMI—Isabella Prio was born in Miami, is 20 now and a junior at Boston College who fully expects to return to Cuba someday and help shape the island’s future. But she’s never been to the country where her grandfather was once president and refuses to visit until it’s a democracy.

Cherie Cancio, 29, also was born in Miami and runs tours to the island for young Cuban-Americans eager to explore their heritage.

Two daughters of exile. Both passionate in wanting to affect change in a country that has been in the grasp of the Castro brothers’ authoritarian rule for decades, but very different in their approaches.

For the hundreds of thousands of children like Prio and Cancio born of Cuban exiles—some two and three generations removed from the island—Fidel Castro’s death potentially opens a door to a world long off-limits. Or at the least, it seems to bring it within closer reach.

Millennial Cuban-Americans say Castro’s death at the age of 90 symbolically offers hope for improved dialogue between the countries. Some thought the dialogue had begun under President Barack Obama, who visited Cuba in March. But with President-elect Donald Trump, the future of diplomacy between the two countries is uncertain.

“It’s definitely in the hands of the young people to take it over,” Prio said. “We just have to be careful about how we go about it.”

How that dialogue will unfold is anyone’s guess, and while attitudes are shifting, the community is still divided on the best way to chart a new course for the island—or whether Miami’s exiles even should play a role.

Prio, a finance and marketing student, still won’t visit until the Castro regime steps down, and democracy is restored. For now, she’s disappointed when she sees friends’ photos of Cuba on Instagram and Facebook. Her views are more in line with people her parents’ and grandparents’ age.

“Young Cuban-Americans really want engagement on the island,” said Guillermo Grenier, a professor of sociology at Florida International University in Miami and a lead investigator of the FIU Cuba Poll, an annual poll of Cuban-Americans co-sponsored by the Cuban Research Institute.

Still, said Grenier, “how younger Cuban-Americans feel about Fidel Castro dying is kind of independent” of their interest in engaging with the island.

“There’s been a shift of millennial Cuban-Americans, who are more open to President Obama’s policies,” says Cancio, whose father reached Florida on the Mariel Boatlift in the 1980s.

She admits that the children of exiles grapple with wanting to learn about their heritage while being respectful of their parents’ struggles. Many millennials want to go to Cuba but are hesitant to do so out of respect for their parents’ position that the Castro regime must relinquish power and democracy installed before any substantial engagement.

“We all respect the sacrifices and the history of our parents, especially those of us from Miami,” she said.

Trump Aides Say Cuban Government Will Have to Change

That’s why she believes in educating Cuban-Americans, while building bridges with folks in Cuba.

“We want Cuban Americans to visit Cuba, experience it, talk about it, and think about what an emerging Cuba means for them and their communities in the U.S.,” reads the website of CubaOne, Cancio’s nonprofit.

Still, Cancio doesn’t believe that she, or the Miami-born children of exiles, has a role to play in reshaping Cuba. That’s up to the people on the island, she says.

“I have the freedom here to support whatever policies I want. I don’t know I should have that freedom in another country, even if my father was born there.”

Javier Gonzalez, a 21-year-old University of Miami junior, feels that Cuba is his birthright. His father came from Cuba and hasn’t returned. Gonzalez also hasn’t visited.

“A free Cuba or nothing,” said Gonzalez, who is majoring in political science, economics and aquaculture.

Gonzalez attended Belen Jesuit Preparatory School in Miami—a private school that was once in Havana, only to be seized after Castro took power and expelled from the island.

Castro himself was a 1944 graduate of the school. Gonzalez says many of his teachers knew Castro or studied with him, and the exile experience permeated daily high school life, as it did for him at home.

Each day while walking to his Latin American studies class, Gonzalez would pass the wall of martyrs, a photographic journey of all the alumni who died fighting “for a higher cause,” including attempting to oust Castro. Many were political prisoners under the Castro regime.

Gonzalez thinks of Cuba as his home, and someday, of returning to what he calls “paradise lost.”

When news of Castro’s death broke, he texted Prio, his friend. They and their high school friends who were home for the Thanksgiving break knew where to meet up: Cafe Versailles in Little Havana, with its signs that say “La Casa del Exilio,” or, “house of the exiles.”

Prio, who has friends at her school in Boston who questioned her jubilation over Castro’s death, tried to explain her feelings.

“He’s not a human being, he’s a monster,” she said. “It’s perfectly acceptable to celebrate his death.”

Prio’s grandfather, Carlos Prio Socarras, was president of Cuba from 1948 until 1952, when Fulgencio Batista organized a coup and overthrew the government. Socarras fled the country and backed Castro financially; it was the worst decision of his life, he later said.

Like Gonzalez, Prio believes she will someday go to Cuba and hopes to play a part in its rebuilding.