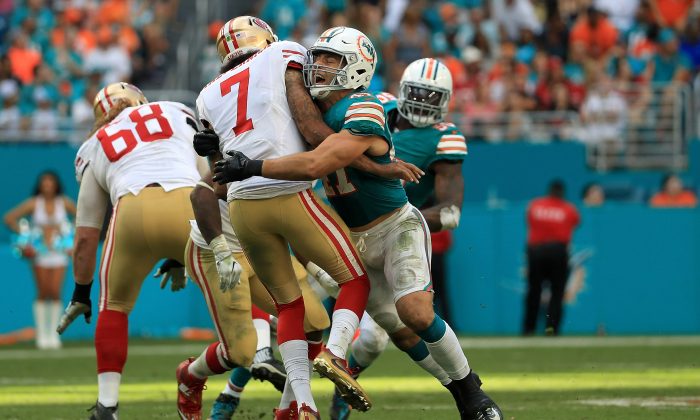 Kiko Alonso #47 of the Miami Dolphins hits Colin Kaepernick #7 of the San Francisco 49ers after a pass during a game in Miami Gardens, Florida on Nov. 27, 2016. (Mike Ehrmann/Getty Images)
NFL

'There was some bad blood' over Castro comments
By Epoch Newsroom

Miami Dolphins linebacker Kiko Alonso tweeted a photo of him tackling San Francisco 49ers quarterback Colin Kaepernick on the final play of Sunday’s game. The Dolphins won 31-24 over the 49ers.

Alonso is of Cuban descent, as his father was forced to leave Cuba.

“There were some feelings on my part,” Alonso told Armando Salguero, a reporter for the Miami Herald. “I didn’t [see what happened in Cuba first-hand]. But I do have feelings about it. So there was some bad blood there for me with Kaepernick.”

Kaepernick drew ire for wearing a T-shirt of civil rights leader Malcolm X meeting with Cuban dictator Fidel Castro, who died on Friday. Kaepernick was forced to defend comments about Castro, saying that he was “not talking about Fidel Castro and his oppression” and “I never said I support the oppressive things [Castro] did,” adding that he thought Castro made proper investments in education and health care.

Salguero wrote, however, that both he and Alonso’s father have vastly different perspectives than Kaepernick. Salguero also disputed Kaepernick’s attempts to distance himself from his Castro comments.

“He’s not aware,” Carlos Alonso told the Herald. “He knows about what happened with Castro dying. But he’s busy playing football.”

“I got interviewed earlier about what I thought of him [Kaepernick], and I said it’s about immaturity,” Carlos said. “He doesn’t know about the suffering the Cuban people have had. He doesn’t have a clue.”

Colin Kaepernick Blasted for Not Voting

“He still has no clue what a ruthless killer of the Cuban people this guy [Castro] was,” Carlos told the Herald.

Kiko Alonso said he didn’t have anything to say to Kaepernick.

“Usually, I just try to play my game. But I did try to hit him.”

Alonso finished with 12 tackles and an interception of Kaepernick, who has sat or knelt during the national anthem before games to protest police brutality.

For his part, Kaepernick had a resurgent game of sorts, throwing for 296 yards and three touchdowns, along with 113 rushing yards on 10 carries. He led everyone in rushing.