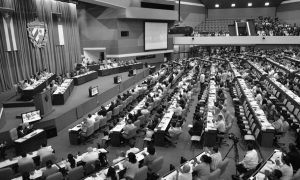 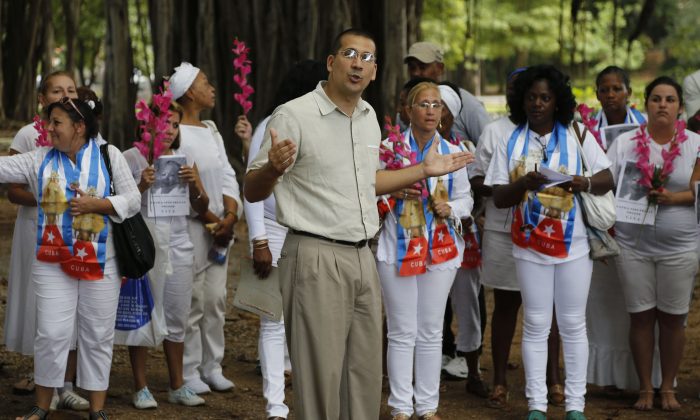 Cuban dissident Antonio Rodiles speaks during a gathering of Cuba's dissident group Ladies in White in Havana, Cuba, Sunday, Dec. 28, 2014. Cubas government has long narrowly defined the bounds of acceptable speech, accusing many dissidents of being as agents of the U.S. government or right-wing exile groups, and subjecting them to surveillance, detention and harassment. (AP Photo/Desmond Boylan)
Americas

HAVANA—Cuban dissidents said Tuesday that police had arrested at least three members of the island’s political opposition hours before the first major test of Cuba’s tolerance for dissent since this month’s declaration of U.S.-Cuban detente.

Expatriate artist Tania Bruguera returned to Cuba Friday after announcing plans to set up an open microphone for any member of the public Tuesday afternoon on the Plaza of the Revolution, the symbolic heart of Cuban political power.

“I’ve been arrested,” dissident Antonio Rodiles told The Associated Press by telephone, reporting that police were taking him away around 12:30 p.m. The wife of Eliecer Avila, the 29-year-old head of moderate opposition group “Somos Mas,” told the AP he had also been arrested along with Reinaldo Escobar, husband of renowned blogger Yoani Sanchez

The idea of airing political critiques within earshot of the president’s office and military headquarters outraged many government officials and their backers, who blasted Bruguera on social networks as a provocateur seeking to provoke disorder in Cuba.

Bruguera’s whereabouts were unclear Tuesday afternoon. Her sister told the AP that the artist last spoke to her family Tuesday evening.

“We have heard anything of her,” Deborah Bruguera said. A police officer stood guard in front of Tania Bruguera’s apartment Tuesday afternoon and did not let a reporter approach.

President Barack Obama pledged this month that easing the embargo on Cuba and normalizing diplomatic relations would be a better way of supporting Cuban civil society. President Raul Castro told the National Assembly three days later that detente would not lead to a change in Cuba’s single-party system.

Cuba’s government has long narrowly defined the bounds of acceptable speech, accusing many dissidents of being as agents of the U.S. government or right-wing exile groups, and subjecting them to surveillance, detention and harassment.

Pro-government bloggers over the weekend launched a near-constant stream of attacks on Bruguera and her on blogs and Twitter. Cuba’s state union of artists and writers released a statement describing the event as designed to sabotage warming relations between Cuba and the United States.

From The Associated Press. Anne-Marie Garcia contributed to this report.