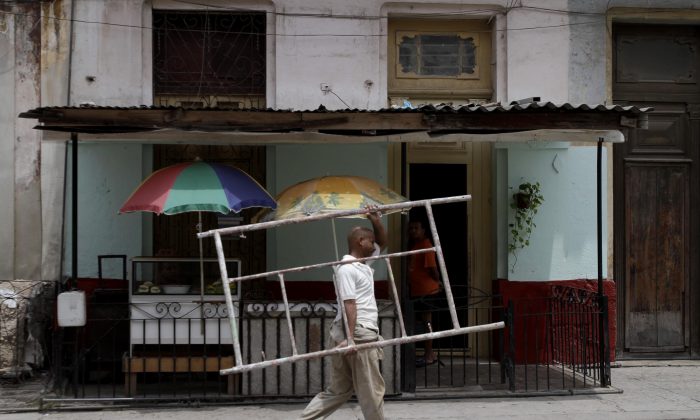 Ruben Font carries a scaffold piece to his home in Havana, Cuba, on May 23, 2011. Cuba has reached a landmark agreement with foreign creditors over billions of dollars in unpaid debt dating back 25 years. (AP Photo/Franklin Reyes)
Americas

PARIS—Cuba has reached a landmark agreement with foreign creditors over billions of dollars in unpaid debt dating back 25 years.

The Paris Club of creditor nations announced a deal Monday, Dec. 14, under which creditors will cancel $8.5 billion in overdue interest payments, in exchange for a promise by Cuba to pay off $2.6 billion of the original debt over the next 18 years.

“This accord opens the way to a new era in relations between Cuba and the international financial community,” Finance Minister Michel Sapin said in a statement.

Sapin said the deal “helps to definitively resolve the issue of Cuba’s medium-term debt … which has not been honored since the 1980s.”

President Raul Castro has been working to improve relations with creditors as he tries to modernize and open up the communist island’s economy, which defaulted on its debts in 1986 and was devastated by the 1991 collapse of the Soviet Union.

US, Cuba Leaders Meet for 2nd Time in This Year

The U.S. maintains an economic embargo against Cuba, and is not among the creditor nations, though President Barack Obama and Castro have opened ties.

As part of the debt agreement, France canceled $4 billion in late interest payments, which made up the bulk of the money Cuba owed. Of the remaining debt, Cuba agreed to pay $240 million in cash to France, and $230 million will be invested in development projects, the Finance Ministry said.

The creditors from the Paris Club said in a statement that they “welcomed progress made by Cuba toward the normalization of its relations with creditors and the international financial community.”