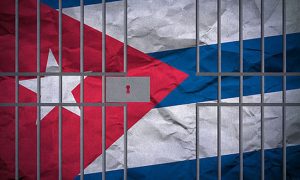 Ben Sheen: Hello and thank you for joining us. My name is Ben Sheen, I’m a managing editor here at Stratfor. I’m joined today by Reggie Thompson, our Latin American analyst, to talk about the recent developments we’ve seen in Cuba. So Reggie, it’s been an eventful day, what with the prisoner exchange and the statements made by President Obama and Raul Castro himself, so what does this mean?

Now what we saw today was the president went as far as he can in what he can legally do without actually consulting Congress under the Helms-Burton Act of 1996. In other words, the United States has had an embargo on Cuba since the early 1960s, and this is something that has pretty much defined the relationship between the two countries. Now, in 1996, it was conditioned by law that the embargo cannot be lifted before Congress is consulted — in other words, the president has to go to Congress and ask them to vote on the lifting of this embargo. Now, the president right now loosened restrictions on Cuba, he loosened some of the travel restrictions for American citizens, some of the financial restrictions that prohibit transactions between the United States and Cuba, and he loosened some of the trade restrictions (in other words, now certain products defined in the president’s speech today, such as agricultural products and some construction materials, can flow to the Cuban private sector.)

Now, going forward, what this likely means is that the United States and Cuba are going to engage in talks on a host of issues on how and when to re-establish embassies in both capitals, how and when to proceed on the issue of the normalization of ties, which according to the Helms-Burton Act is definitely conditioned on the re-establishment of free political activity as defined by the United States in Cuba. And so a host of issues needs to be addressed, and this is not going to be a short process, this is likely going to be drawn out and will last months if not years.

Ben: So we’re going to see a gradual thawing of relations between the United States and Cuba. So how is this going to affect the Cuban relationship with Venezuela then?

Reggie: Well, the Cuban relationship with Venezuela was largely dependent on oil, it was mostly defined in Venezuela as the role of financial patron for the Cubans. In other words, the Cubans received low-cost petroleum and refined products shipments and also some financial aid from the Venezuelans. This is pretty typical of Cuban behavior throughout history: As a small island, they have been dependent on foreign patrons such as the United States, the Soviet Union and most recently the Venezuelans. Now with the Venezuelan economy declining ever so steadily, what we’re seeing now is that the Cubans have the impetus, they have the drive, to get away from that patron and to try to normalize relations with the United States. In other words, if they see that in Venezuela something’s coming down the line, such as perhaps a cutoff in oil shipments, they don’t want to be stuck in the difficult financial position of having to scramble to find a new source of energy or a new source of financial assistance or even trade.

Ben: So this completely makes sense from the Cuban perspective. Now you mentioned that we’re going to see a gradual thawing, so what do you think the next steps will be?

Reggie: Well the next steps are almost certainly (as those that were outlined by President Obama today) going to be the high-level discussions. In April 2015, we’re going to see a summit of the Organization of the American States. Now traditionally Cuba has been excluded from that, throughout the Cold War that was mostly a forum for pro-United States nations to meet and discuss topics of regional importance, and Cuba was largely excluded from this. They never attended, they were expelled by the organization in the early 1960s, and in 2009 the prohibition on Cuban attendance there was lifted — the Cubans could have attended some of the past summits — but they chose not to. And now as a result of these lengthy negotiations we’ve been seeing — according to some sources the negotiations have been going on for a year, if not more — the Cubans are coming back into this forum. It’s not clear yet who’s going to lead the delegation, whether or not President Obama or President Raul Castro is going to attend this forum, but it definitely provides an area for both parties to meet openly and discuss.

Now we’re going to see behind-the-scenes negotiations as well. We’re going to see talks toward possibly even eventually a managed transition in Cuba, because obviously that’s weighing heavily on the U.S. government right now. The Americans would like to see Cuba transition smoothly. The Cubans have been implementing some economic reforms on the island over the past four years or so, but there’s definitely still the question of how a transition would actually play out — what it would look like, who would be in charge — and no doubt this would be something that both sides will be eager to discuss.

Ben: Yeah, most definitely, how the actual mechanics develop in the future. Reggie, thank you so much for sharing your thoughts with us on this significant development. I encourage you to look forward to further analysis on the Cuba-U.S. relationship coming from Stratfor in the future. Thank you.

“Conversation: Cuba and the U.S. Rekindle Ties” is republished with permission of Stratfor.