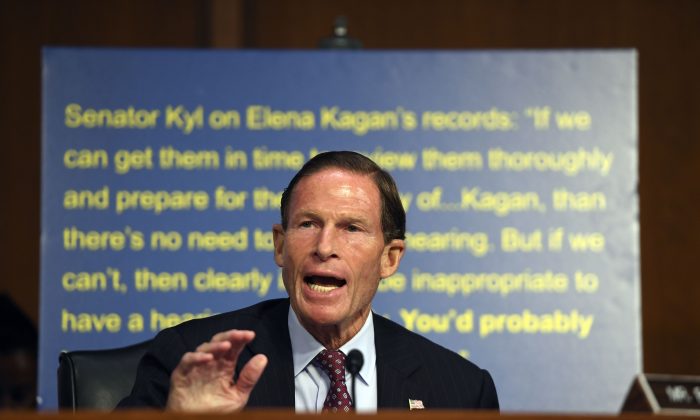 Connecticut Senator and Senate Judiciary member Richard Blumenthal was one of the most vigorous opponents of new Supreme Court appointee Justice Brett Kavanaugh.

In late September, before Republicans agreed to give the Federal Bureau of Investigation a week to investigate allegations of sexual impropriety, Blumenthal claimed that neglecting to call for such an investigation is “tantamount to a cover-up.” Blumenthal aimed his comments squarely at President Donald Trump.

One could have anticipated Blumenthal’s resistance to Kavanaugh. In December 2016, Blumenthal promised attendees at a meeting organized by the Connecticut branch of the Council on American–Islamic Relations (CAIR) that he would push back against certain Trump nominees.

There is abundant evidence that CAIR officials, including co-founder Nihad Awad, have supported the terrorist group Hamas, as discussed below.

According to a CAIR Connecticut Facebook post on Dec. 16, 2016: “CAIR CT organized a meeting today with several members of the Muslim community and Senator Richard Blumenthal.

“Sen. Blumenthal promised to speak out forcefully and oppose any form of a Muslim Registry. He said he would vigorously question Jeff Sessions who has been nominated for Attorney General for racist statements he has made in the past and also question whether Gen. Mike Flynn is suitable to be National Security advisor based on his mishandling of classified information.”

At the meeting, which included CAIR Connecticut chairperson Farhan Memon, CAIR Executive Director Mongi Dhaouadi, and Fatma Antar of the Muslim Coalition of Connecticut, Blumenthal told attendees that he “feels some of Trump’s appointments will have a difficult time winning Senate approval,” according to Connecticut local news channel WSFB.

On Sept. 28 of this year, the Senate Judiciary Committee voted along partisan lines in favor of Kavanaugh’s nomination to the Supreme Court.

In a statement issued the same day, CAIR National Board chair Roula Allouch said: “A lifelong appointment to the U.S. Supreme Court is a privilege and a duty, not a right. Based on Judge Kavanaugh’s overtly partisan and belligerent performance at yesterday’s Senate Judiciary Committee hearing, and on the credible accusations of sexual misconduct, we urge the full Senate to reject his nomination.

“The Senate should instead confirm a new nominee who has the temperament and neutrality necessary to pass judgment on the weightiest issues facing our nation now and for decades to come.”

Not surprisingly, CAIR also urged the Senate to call for a renewed FBI investigation of the allegations against Kavanaugh.

In April of this year, Blumenthal addressed CAIR Connecticut’s annual banquet and fundraiser again. This time, Blumenthal spoke alongside Faiza Patel of the Brennan Center for Justice and professor at the New York University School of Law.

Patel is a strong opponent of the plan by some Republican lawmakers to officially designate the Muslim Brotherhood—which begat Hamas and, by extension, CAIR—as a terrorist organization.

In an article for leftist “national security” and Soros-funded website Just Security, Patel wrote: “According to experts on the Middle East, the Muslim Brotherhood is a religious organization, a political party, and a social service provider that has operated for decades in numerous Middle Eastern, South Asian, and African countries.

“Though it has engaged in political violence in the past, it disavowed violence decades ago in favor of political engagement. In 2011, it won elections in Egypt, forming a government that was fully recognized by the United States. Two previous administrations, one Republican and one Democratic, concluded the Muslim Brotherhood did not engage in terrorism and did not warrant designation as an FTO (Foreign Terrorist Organization).”

The designation of the Muslim Brotherhood as a terror organization could one day be an issue decided by the Supreme Court. Does this factor into CAIR’s evident disdain of Kavanaugh?

The completely unconstitutional concept of “hate speech” is regularly promoted by CAIR, often in the context of combating “Islamophobia.” At the December 2016 meeting mentioned above, Blumenthal also planned to “draft legislation” related to the cousin of “hate speech”: hate crimes. Blumenthal’s legislation would “implement tougher penalties on offenders,” according to WFSB.

Blumenthal’s legislation, the “NO HATE” Act, was introduced three months after his meeting with CAIR.

The senator also promised to try to secure federal funding for Connecticut mosques. According to the aforementioned CAIR Connecticut post on Facebook, “Sen. Blumenthal’s staff will investigate how masjids [mosques] can access funds from the Department of Homeland Security to improve the security of masjids.”

With a constitutionalist majority, Supreme Court “hate speech” and “hate crime” laws, which fly in the face of the First Amendment, would have very short lifespans. Such laws are one of CAIR’s main weapons against criticism of Islamic supremacism.

A constitutionalist Supreme Court could quickly undo much of CAIR’s subversive agenda.

As mentioned, CAIR was co-founded by Awad, a self-professed Hamas supporter. CAIR was also identified as an unindicted co-conspirator in the Holy Land Foundation terrorist financing trial.

The FBI cut ties with CAIR because of the organization’s radical connections. Yet a serving U.S. senator believes it is acceptable to work with CAIR to oppose U.S. government policy and presidential appointees.

CAIR openly opposed the nomination of Kavanaugh to the Supreme Court. CAIR’s self-declared ally, Blumenthal, led the charge on the Senate Judiciary Committee to shut down the Kavanaugh nomination.

Perhaps Blumenthal and CAIR should have called for an FBI investigation into themselves?