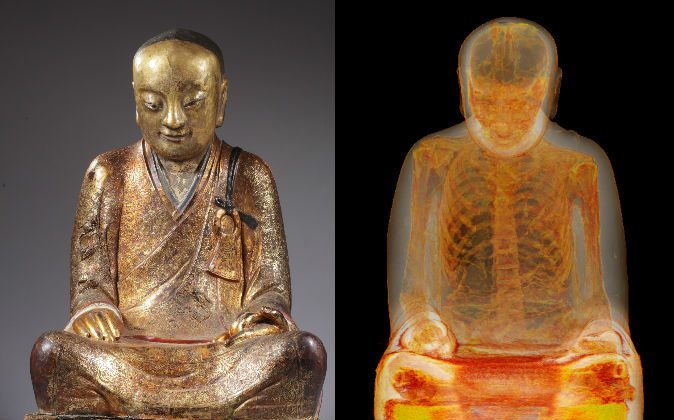 Scientists found the unthinkable a few months ago when they examined a 1,000-year-old Buddha statue from China: it contained a mummified monk who apparently died during meditation.

The mummy was discovered in a cavity inside the statue after a private buyer took it to an expert for restoration, according to CNN. It’s not clear when the statue was taken out of China.

A team of researchers did a CT scan on the statue and found the mummy. They noted that the mummy’s organs had gone missing.

“We thought it would be lung tissue, but instead we found little scraps of paper covered with Chinese characters,” said Vincent van Vilsteren, a curator with Drents Museum, per CNN.

The mummy was found sitting on a bundle of cloth that was covered in Chinese writing. They found out that the mummy was a Buddhist monk named Liuquan.

But how he was mummified is somewhat of a mystery. He may have gone through the practice of self-mummification, popular in Japan, China, Thailand over 1,000 years ago. The remains may have deteriorated and later been placed inside a statue.

“It was not uncommon for monks to practice self-mummification, but to find a mummified monk inside a statue is really extraordinary,” Wilfrid Rosendahl, a German palaeontologist who led the research, told the Telegraph. “It’s the only known example in the world.

“Using a CAT scan, we saw that there was a perfectly preserved body with skin and muscles inside the statue. It’s a complete mummy, not just a skeleton. He was aged between 30 and 50.”

The monk was found sitting in the lotus position, researchers added.

“We suspect that for the first 200 years, the mummy was exposed and worshiped in a Buddhist temple in China… only in the 14th century did they do all the work to transform it into a nice statue,” added van Vilsteren.

Rosendahl said the monk likely died in the process of self-mummifcation.

“During the last weeks he would have started eating less food and drinking only water. Eventually he would have gone into a trance, stopped breathing, and died. He basically starved himself to death,” Rosendahl said.

“The other monks would have put him close to a fire to dry him out and put him on display in the monastery, we think somewhere in China or Tibet.”

“He was probably sitting for 200 years in the monastery and the monks then realized that he needed a bit of support and preservation so they put him inside the statue.”