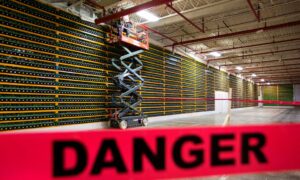 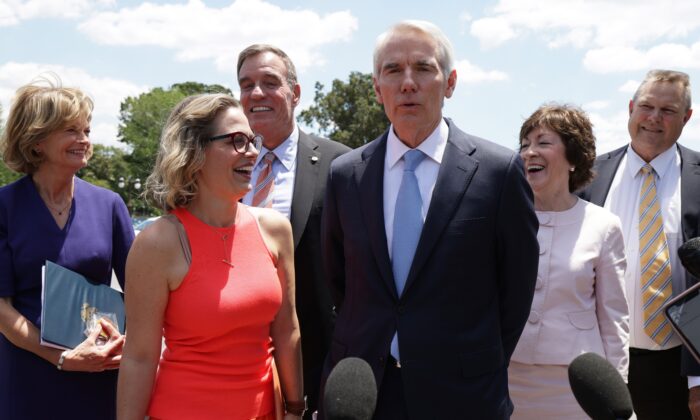 By Laura Weiss
From CQ-Roll Call

Senators hit a roadblock Thursday night on adjustments to the bipartisan infrastructure package’s cryptocurrency reporting rules as the White House weighed in to push a smaller change.

The bill’s lead negotiators, Sen. Kyrsten Sinema (D-Ariz.) and Sen. Rob Portman (R-Ohio), joined with Sen. Mark Warner (D-Va.), on an amendment late Thursday that would exclude “proof-of-work” miners and wallet developers from new requirements that those facilitating cryptocurrency transactions must report information on trades to the IRS for tax enforcement purposes.

An earlier, competing amendment would have shielded all blockchain network validators and developers of peer-to-peer cryptocurrency exchanges from the new mandates. But the Treasury Department doesn’t like the latter exemption, arguing it could still lead to untaxed transactions.

The White House stepped in to back the Warner-Portman-Sinema amendment, describing it as a compromise, but backers of the earlier amendment balked. Senate Finance Chair Ron Wyden (D-Ore.), Sen. Patrick J. Toomey (R-Pa.), and Cynthia Lummis of Wyoming all doubled down on their own proposal, as the cryptocurrency industry did the same.

“I think we’re at an impasse,” Toomey told reporters. “They want to apply this in a fashion that we think is too broad, doesn’t work and shouldn’t be done—and will do harm.”

Later on Thursday, Senate Finance ranking member Sen. Michael D. Crapo (R-Idaho) told reporters it was possible there could be an agreement to take up both amendments “side by side,” giving senators a chance to hear both arguments and then cast their votes.

A 60-vote hurdle for each amendment was under consideration as the chamber was seeking to wrap up the infrastructure bill, potentially this weekend after Senate Majority Leader Charles E. Schumer filed cloture Thursday night.

Senators on both sides of the aisle and the White House agree that centralized cryptocurrency exchanges should be added to the definition of a “broker” that must provide the IRS with tax forms showing clients’ names, addresses and gross proceeds from transactions, Toomey said. Adding that business transactions of over $10,000 in cryptocurrency must be reported to the IRS—much like cash payments are now—has also generated no major controversy.

The stalemate Thursday came over which players in the nascent industry should be exempted from broker reporting rules, after industry groups spent days pressing for a narrower definition. They warned that some intermediaries wouldn’t have the information they’d be required to provide the IRS on trades of digital assets such as Bitcoin and Ethereum, and that reporting obligations could push businesses overseas. Wyden, Toomey, and Lummis have made a similar case in recent days.

The White House was calling Democrats in an attempt to block a vote on the Wyden-led amendment earlier Thursday because the Treasury Department wanted the option to require tax forms from creators of peer-to-peer exchanges, according to a GOP aide. The White House then publicly got behind the Warner-Sinema-Portman amendment.

“The Administration believes this provision will strengthen tax compliance in this emerging area of finance and ensure that high income taxpayers are contributing what they owe under the law,” Deputy Press Secretary Andrew Bates said in a statement. “We are grateful to Chairman Wyden for his leadership in pushing the Senate to address this issue, however we believe that the alternative amendment put forward by Senators Warner, Portman, and Sinema strikes the right balance and makes an important step forward in promoting tax compliance.”

Portman, who was behind the underlying bill’s reporting provision, tweeted that he would support a vote on the Wyden-led amendment earlier Thursday, before offering his own version. He previously said the text was not meant to apply to the groups that senators wanted exempted.

The Warner-Sinema-Portman amendment would specify that reporting obligations don’t apply to proof-of-work miners and sellers of hardware or software for controlling private keys that access a user’s cryptocurrency, known as wallets. Proof-of-work mining is the more traditional form of validating transactions on a blockchain, where miners solve complex mathematical problems using high-powered computers—a process that’s been criticized for wasting electricity.

The competing amendment would provide “safe harbor for the most climate-damaging form of crypto tech, called proof-of-work,” Wyden tweeted late Thursday. “It would be a mistake for the climate and for innovation to advance this amendment.”

The Wyden-led amendment would exempt all miners, including those using alternative models such as “proof-of-stake,” which Ethereum is gradually moving toward, for instance. That’s where individuals “stake” digital tokens as collateral and receive transaction fees when they are chosen to be validators—a process backers say uses less energy.

The Wyden-Lummis-Toomey amendment would also exempt wallet developers and those “developing digital assets or their corresponding protocols for use by other persons,” unless those users are customers. The latter is the piece that spurred the Biden administration to intervene and that would cover developers of peer-to-peer exchanges.

As industry groups and cryptocurrency businesses took to Twitter calling on senators to vote for the more expansive amendment and reject the Warner-Portman changes, Wyden, Toomey and Lummis weren’t budging on Thursday night.

“Do what you say you’re going to do,” Lummis said in a tweet. “Our amendment protects miners as well as hardware and software developers. The other does not. The choice is clear.”

Niels Lesniewski and Lindsey McPherson contributed to this report.