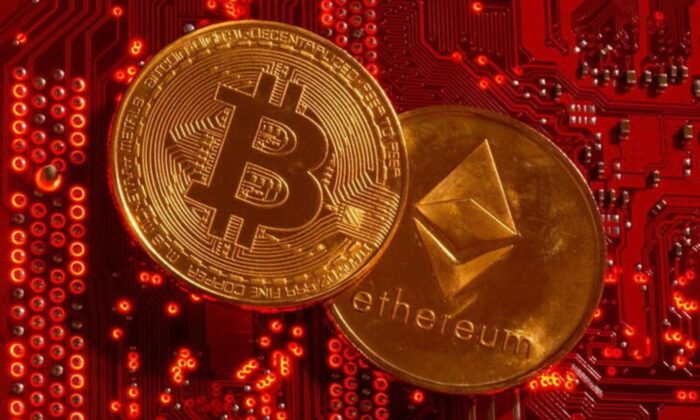 Representations of cryptocurrencies Bitcoin and Ethereum are placed on PC motherboard in this illustration taken, on June 29, 2021. (Dado Ruvic/Illustration/Reuters)
Cryptocurrency

Bitcoin is trading below $43,000, after a significant fall Thursday, in the midst of a broader decline across markets, following the news on Federal reserve tightening monetary policy shifting investors away from riskier assets like stocks and cryptocurrencies.

Bitcoin has touched a new low since September, as the world’s largest cryptocurrency with a market capitalization of over $800 billion lost more than 37 percent of its value from a record high of $69,000 in November. It has lost more than eight percent since Wednesday, based on data from Coinbase. As more exchanges and institutions deal in cryptocurrencies, the fluctuations in the market have started correspondingly affecting the niche segment. Altogether, around $200 billion was wiped off crypto markets in a day.

The Fed has decided to offload some of its $8.3 trillion in Treasurys and mortgage-backed securities, according to minutes released Wednesday. Raising of interest rates may also happen sooner than expected to fight the high levels of inflation plaguing the economy.

“Almost all participants agreed that it would likely be appropriate to initiate balance sheet runoff at some point after the first increase in the target range for the federal funds rate,” according to the meeting summary.

Along with Bitcoin, other currencies like Ethereum fell too. While Ethereum fell 11 percent from Wednesday and is currently trading at $3,387, the third popular Solana, at $148, declined in value by over 12 percent.

The Nasdaq fell to its lowest level since February 2021 as it declined three percent following the news from the Fed. Tech stocks around the world are on a downward slide with shares of Tesla, Netflix, Apple, and Uber declining one percent or more.

Stocks and cryptocurrencies had rallied since the Fed printed almost $4 trillion as part of the recovery process from the COVID-19 pandemic. Lower rates meant higher liquidity and more borrowing, which spurred companies toward new highs at an abrupt pace, resulting in constrained supply chains and shortages that eventually drove up prices.

“Some participants judged that a significant amount of balance sheet shrinkage could be appropriate over the normalization process, especially in light of abundant liquidity in money markets,” the Fed minutes state.

As for where Bitcoin’s heading, Pat White, CEO of Bitwave, told Forbes, “Bitcoin’s run down from 69k has been like they describe war, long moments of sideway boredom interrupted by days of sheer terror.” He added, “Obviously each 10k notch is worth watching, 40k is the next natural floor.”

Yuya Hasegawa, analyst at Japanese bitcoin exchange Bitbank, shared a similar sentiment, saying in an emailed note Thursday to CNBC that Bitcoin might drop to $40,000 if December nonfarm payrolls data shows strong job growth. “The downward pressure on the price is expected to continue until the market fully prices in the tighter-than-expected future monetary policy.”