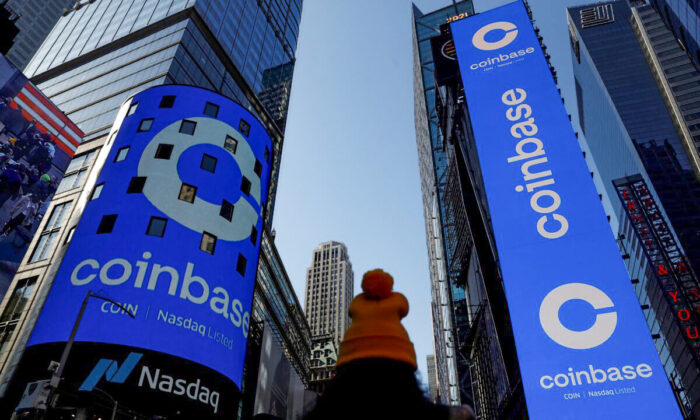 The logo for Coinbase Global Inc, the biggest U.S. cryptocurrency exchange, is displayed on the Nasdaq MarketSite jumbotron and others at Times Square in New York, on April 14, 2021. (Shannon Stapleton/Reuters)
Cryptocurrency

Multiple crypto firms have announced plans to cut jobs as the digital currency market continues to decline, with its total value falling below $1 trillion on June 13.

BlockFi announced a reduction in its headcount by around 20 percent. CEO Zack Prince said in a June 13 tweet, “This is not a decision we take lightly.”

BlockFi grew from 150 employees at the end of 2020, to more than 850 employees. Prince pointed out that the company has been impacted by the “dramatic shift in macroeconomic conditions” causing its growth rate to suffer a “negative impact.”

Reducing the headcount is one of various ways the company plans to manage costs in order to be profitable.

Prince called his employees “the brightest minds in crypto & tech” and expressed his gratitude.

“We’re working to ensure they find a new opportunity when they’re ready. Those impacted can include their contact info in a directory, and we’ll connect them w/ companies hiring,” Prince said.

Crypto.com will also terminate a portion of its workforce. In a June 10 tweet, CEO Kris Marszalek announced a reduction in the corporate workforce by around 260 employees or 5 percent. The termination is “difficult and necessary” to make sure the company has “continued and sustainable growth” in the long term, he noted.

“The markets will turn, and when they do, you can be sure that we will be ready to drive and capture the next wave of growth for cryptocurrency adoption,” Kris said.

The layoffs come as the value of the cryptocurrency market fell below $1 trillion for the first time since January 2021. On June 13, the value plunged as low as $926 billion. That number is a far cry from November 2021 when the crypto market peaked at $2.9 trillion.

In the past two months alone, the market has lost $1 trillion in value. Bitcoin, the world’s largest cryptocurrency, fell to its lowest level in 18 months on Monday and is down by over 50 percent year-to-date.

Bitcoin and Ether are getting a “severe bruising in the ring,” she said. “They are prime victims of the flight away from risky assets as investors fret about spiraling consumer prices around the world.”

Last month, crypto exchange Coinbase announced a temporary end to recruitment, quickly making that a permanent freeze.  This morning Coinbase CEO Brian Armstrong announced in a blog post that it plans to cut about 1,100 jobs—approximately 18 percent of its global workforce.

Going against the trend, crypto exchange Binance announced in a June 3 tweet that it is hiring.

CoinGecko co-founder Bobby Ong expressed surprise about the contradictory workforce strategies adopted by the crypto exchanges, in a tweet June 4:

“We are just a few months into the bear market and exchanges are making people redundant and rescinding offer letters. How badly are you guys managing your finances and headcount? You guys are in one of the most profitable sectors of crypto making billions just last year.”