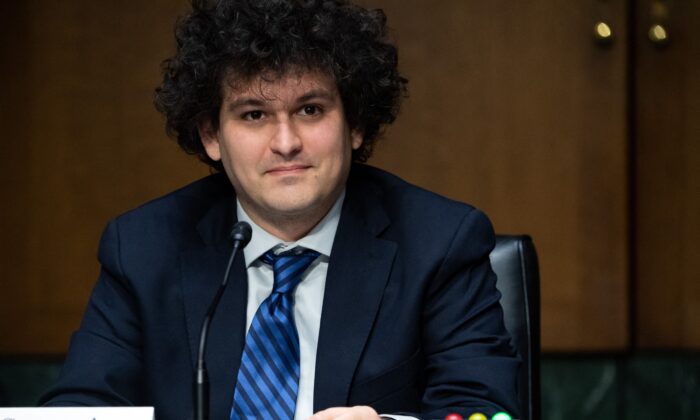 Samuel Bankman-Fried, founder and CEO of FTX, testifies on Capitol Hill in Washington, on Feb. 9, 2022. (Saul Loeb/AFP via Getty Images)
By Naveen Athrappully

In an interview with CNBC, Hillmann said that venture capitalists were attracted to Bankman-Fried’s persona and appearance of credibility. Bankman-Fried is either like Elizabeth Holmes, founder of the scandalous now-defunct company Theranos, who was “completely delusional,” or is like Bernie Madoff, who created a “cult of personality” and was “manipulative,” Hillmann said. Madoff was sentenced to 15 years in prison back in 2009 for running the largest Ponzi scheme in history worth $64.8 billion. He died in in prison in 2021.

“There’s no middle ground … It’s one of the two,” Hillmann insisted. FTX filed for Chapter 11 bankruptcy last week after concerns about the company’s balance sheet triggered a rush of withdrawals by depositors, which pushed the company into a liquidity crisis.

Before filing bankruptcy, FTX had approached Binance for a rescue solution. On Nov. 8, Binance signed a nonbinding agreement to acquire FTX. However, Binance backed away from the deal the next day, stating that issues at FTX were beyond them.

According to Hillmann, it took only two hours of due diligence for Binance to realize that FTX could not be saved. “It was like a bomb went off in that place,” Hillmann said.

“You know, we’re getting on calls, people are crying … It was complete pandemonium over there … [When] Sam went completely silent on them, the entire organization just fell to pieces.”

In a recent court filing, John Ray, who replaced Bankman-Fried as CEO of FTX, stated that in his decades of experience overseeing some of the biggest bankruptcies, he had never seen anything as bad as the situation the crypto exchange is facing.

He called the FTX situation “unprecedented.” Ray had once managed bankruptcy proceedings of the infamous energy firm Enron. FTX systems integrity was compromised while control was concentrated into the hands of a few inexperienced and potentially compromised individuals, Ray stated.

“Never in my career have I seen such a complete failure of corporate controls and such a complete absence of trustworthy financial information as occurred here,” he said in the declaration.

Meanwhile, the House Financial Services Committee has announced that it will hold a bipartisan hearing on the collapse of FTX in December.

The members of the committee are expecting to hear from the companies and individuals involved in the situation. In a press release on Nov. 16, Rep. Andy Barr (R-Ky.), the lead Republican on the committee, slammed regulators for the crisis.

The committee “will work to expose any impropriety that led to this historic collapse and hold regulators accountable for being asleep at the switch, obsessing about ‘climate risk’ instead of actually protecting investors vulnerable to crypto exchanges with limited transparency and poor risk management,” he said.