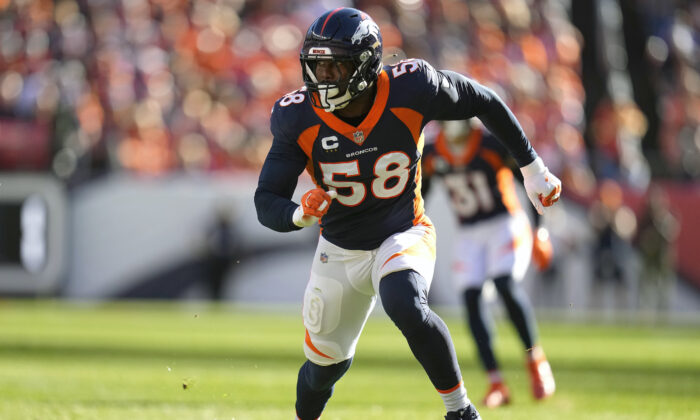 Denver Broncos outside linebacker Von Miller (58) against the Las Vegas Raiders during the first half of an NFL football game in Denver, on Oct. 17, 2021. (Jack Dempsey/AP Photo)
Cryptocurrency

A group of cryptocurrency enthusiasts is aiming to raise $4 billion to buy NFL team the Denver Broncos through a Decentralized Autonomous Organization (DAO), or a group of individuals who act without a leader and rely on crypto technologies to track and validate its inner workings.

DAOs use smart contracts and are built on blockchain technology, functioning as an online cooperative.

“If we are successful in purchasing the Broncos, the fans would govern the team through a DAO, which would take the legal form of a cooperative,” the group seeking to buy the NFL team said on their website.

“Your membership in the cooperative makes you an owner of the Broncos and, thus, able to participate in the governance. The DAO is regulated by smart contracts which ensure every single member is subject to the same rules.”

The crypto group includes people from a wide range of occupations like athletes, accountants, attorneys, and software developers, with a stated aim to buy the Denver Broncos “as a community,” and put the ownership of the team in “the hands of the fans.”

If the group fails to buy Broncos in whole or in part, all the money collected will be reimbursed. The group’s DAO is expected to go live in the first week of March.

ESPN estimates the Denver Broncos to be valued at just below $4 billion. The team’s trustees earlier said that they intended to sell the Broncos by the start of this year’s season.

If the Broncos are sold, it would be the highest price tag for a team in the history of North American sports. The current record is held by the New York Mets, which was bought by Steve Cohen in 2020 for $2.4 billion.

Colorado Gov. Jared Polis has announced that he would be “thrilled” if the deal between the crypto group and the Denver Broncos goes through. He recently revealed plans to allow the state to collect taxes in the form of cryptocurrencies by the summer of this year.

“I would be excited to be part of it myself,” Polis told CNBC. “The challenge will be it’ll take a lot of money … but you know what, if your imagination is big enough, then it can happen. And anything I can do to make it happen, I’d be happy to.”

The deal will face a big hurdle due to NFL rules passed in 1980 that banned community-driven ownership of teams. According to the rules, at least 30 percent equity in a team must be held by a single person.

Family ownership structures might be allowed, with minor exceptions. The NFL also limits the number of team owners to 32.

The sale needs to be approved by the NFL.