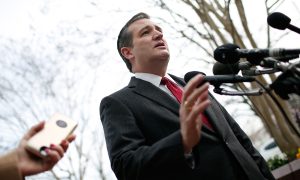 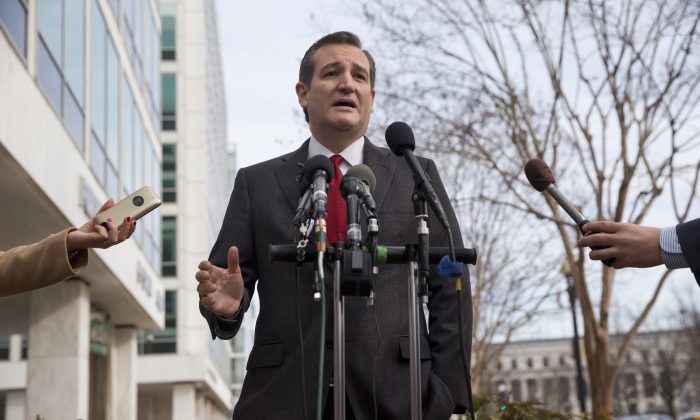 Republican presidential candidate, Sen. Ted Cruz, R-Texas speaks to the media about events in Brussels, Tuesday, March 22, 2016, near the Capitol in Washington. Cruz said he would use the "full force and fury" of the U.S. military to defeat the Islamic State group. (AP Photo/Jacquelyn Martin)
Politics

Cruz’s Comments After Attack Criticized by Muslims, Others

Cruz said Tuesday that law enforcement should be empowered to “patrol and secure Muslim neighborhoods before they become radicalized.” Echoing earlier statements from rival Donald Trump, Cruz also said the U.S. should stop the flow of refugees from countries where the Islamic State militant group has a significant presence. The Islamic State took credit for the attacks at the Brussels airport and a subway station that killed dozens Tuesday and wounded many more.

Muslims across the county and groups including the Council on American-Islamic Relations and the Anti-Defamation League condemned Cruz’s statements, but many said such a reaction was nothing new. Advocacy groups have said for months that the Islamic-extremist attacks in Paris and San Bernardino and the intensifying rhetoric in the presidential campaign have ratcheted up animosity against American Muslims.

“We believe we are part of the society. We have the same ideology as mainstream Americans,” said Osman Ahmed, a resident of a Somali neighborhood in Minneapolis. “I don’t think the ideology of surveillance of a Muslim community neighborhood is the right thing to do. That will send a message that Muslim Americans are not a part of American society … and that’s the message that terrorism groups are willing to hear.”

Trump, who has proposed a temporary ban on foreign Muslims entering the U.S, praised Cruz’s plan as a “good idea” that he supports “100 percent” in an interview with CNN. The Republican front-runner also intensified his past calls for the U.S. to engage in harsher interrogation techniques, arguing that Belgium could have prevented the bombings had it tortured a suspect in last year’s Paris attacks who was arrested last week.

Speaking Tuesday afternoon in New York, Cruz praised the city’s police department’s former program of conducting surveillance in Muslim neighborhoods, called for its reinstatement and said it could be a model for police departments nationwide.

After the 9/11 attacks, the New York Police Department used its intelligence division to cultivate informants and conduct surveillance in Muslim communities. In a series of articles, The Associated Press revealed the intelligence division had infiltrated dozens of mosques and Muslim student groups and investigated hundreds. The program was disbanded amid complaints of religious and racial profiling.

The Council on American-Islamic Relations, the nation’s largest Muslim civil rights and advocacy organization, condemned the call for surveillance, saying it sends “an alarming message to American-Muslims who increasingly fear for their future in this nation.”

The Anti-Defamation League, a U.S. group that battles anti-Semitism worldwide, said Cruz’s plan harkens back to the relocation of Japanese-Americans to internment camps during World War II.

Linda Sarsour, executive director of the Arab American Association of New York, said she fears for armed groups “who are emboldened by the commentary from people like Ted Cruz and Donald Trump.”

“What’s scaring me more is the kind of potential fueling of these vigilantes and people who might want to take up arms and go patrol Muslim neighborhoods,” she said.

They don’t follow the Islamic rules or anything Islam. We’re a peaceful people—we’re not violent.
— Omar Ghanim

Kebba Kah, 46, who was entering a mosque in the Detroit suburb of Dearborn for evening prayers Tuesday, said the bombings in Brussels were “a very terrible thing.” Such attacks are roundly rejected by all Muslims save for “a few radical groups,” said Kah, who came to the American Muslim Center after leaving work at Ford Motor Co.

Dearborn is widely known as the hometown of Henry Ford, who hired Arabs and Muslims in the automaker’s early days and helped create what is now one of the nation’s largest and most concentrated communities of residents who trace their roots to the Middle East.

Flags from Egypt, Syria, Lebanon and other majority Muslim nations fluttered over the mall in a stiff breeze—but a large American flag flying from the roof was taller than the rest, patrons were quick to point out.

“We’re targeted even if it’s not our fault,” said Ghanim, adding that the Islamic State was not Islam as he understood it.

“They don’t follow the Islamic rules or anything Islam,” he said. “We’re a peaceful people—we’re not violent.”