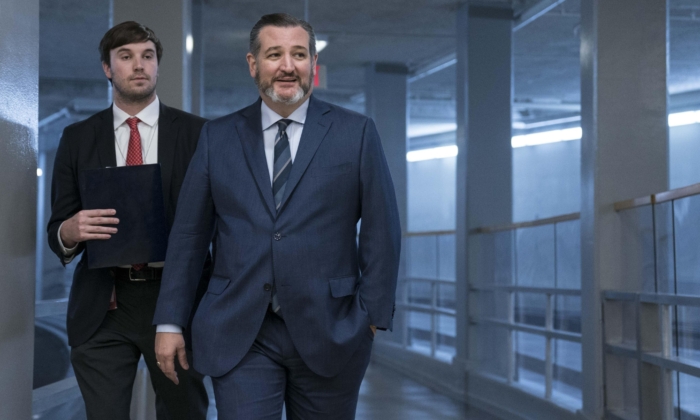 Sen. Ted Cruz (R-Texas) plans to introduce a measure that would plug a loophole exploited by the Chinese Communist Party (CCP) to beam propaganda into the United States from a radio station in Mexico.

Cruz proposed the bill in response to the granting of a broadcast license to a radio station in Mexico that broadcasts content from the CCP-owned Phoenix Satellite Television. He had unsuccessfully urged the Federal Communications Commission (FCC) to block the license in 2018.

The proposed legislation (pdf) would amend the Brinkley Act to prohibit the FCC from granting broadcast licenses to companies purchasing radio stations with the intent to change the language of the programming, “unless the FCC can certify that the programming of the station will never be influenced by a foreign government or governing party.”

The Washington Free Beacon was first to obtain a copy of the bill.

“China should not be able to set up shop in Mexico and blanket America with propaganda,” Cruz said in a statement. “Every year, the CCP spends billions of dollars purchasing news outlets and waging information warfare to extend the reach of its propaganda and whitewash the unflattering and politically inconvenient truths about its totalitarian regime.

“We are seeing this play out right now as news outlets across the country parrot Chinese talking points about the coronavirus pandemic—a pandemic that could have prevented.”

A Chinese company purchased the Mexican radio station XEWW in 2018. The station now broadcasts propaganda into the United States. The company then applied for a broadcast license, but the application failed to mention the station’s ties to Phoenix Satellite Television. For example, the address listed for programming content pointed to a building owned by Phoenix TV.

According to the 2009 testimony of Anne-Marie Brady, a global fellow at the Wilson Center, “Phoenix is nominally privately-owned; however, its current main investor is the state-owned enterprise China Mobile.” In 2016, Phoenix TV broadcast the forced confessions of Hong Kong booksellers who violated the CCP’s censorship law.

China Mobile was one of the three state-owned Chinese companies threatened by the FCC on April 24 about potentially losing their licenses unless they can prove the communist regime doesn’t influence them.

Cruz intends to introduce the measure once Congress is back in session.

President Donald Trump, during a recent press briefing about the pandemic, asked a reporter from Phoenix TV to state whether she works for a media company owned by China. The reporter, Youyou Wang, said she worked for an independent media in Hong Kong. While Phoenix TV is based in Hong Kong, it’s private in name only.

Phoenix TV is “fully controlled by [the] Chinese government,” according to a 2019 report by the Hoover Institution at Stanford University.