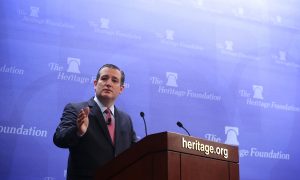 Trump at Center Stage, but Cruz in Spotlight at GOP Debate
0 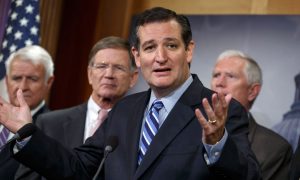 Cruz in the Spotlight as Republicans Take the Debate Stage
0 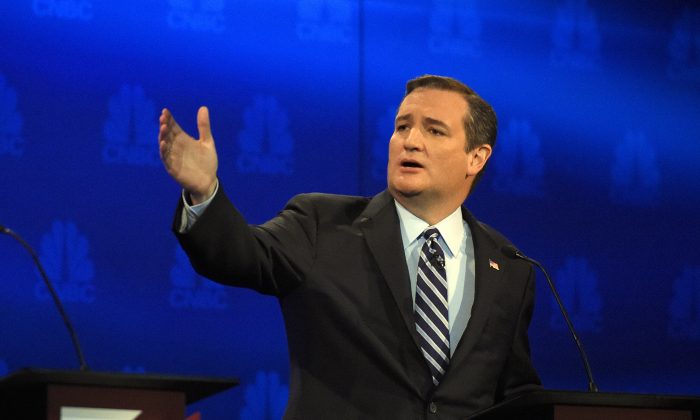 MADISON, Wis.—When Republican presidential hopeful Ted Cruz first ran for U.S. Senate in Texas, the only thing lower than his name recognition was the expectation that he’d win.

Then the state solicitor general, Cruz amassed a coalition anchored by tea party conservatives and evangelicals on his way to defeating a sitting lieutenant governor who entered the primary with the financial and organizational muscle of the GOP establishment.

Now Cruz is trying to take the model nationwide, even as some of his White House rivals, especially Florida Sen. Marco Rubio, compete for the same voters in a scrambled GOP race.

The son of a Southern Baptist preacher, Cruz will continue his efforts this week with a two-day meeting at a remote Texas ranch that began Monday and was expected to bring together about 300 Christian leaders and key financial backers for a fundraiser.

Some are already supporting him, while others are undecided, Cruz said.

The Cruz campaign combines a traditional get-out-the-vote operation — making phone calls and knocking on doors — with modern data analytics to identify and mobilize supporters, beginning with Iowa on Feb. 1. He’s pairing that with state-by-state teams filled with grassroots tea party leaders, local elected officials and state lawmakers who hail from the most conservative corners of the GOP.

“Our objective has been to follow a biblical principle: to build on a foundation of stone, not of sand,” Cruz told reporters in North Little Rock, Arkansas, last week.

Cruz boasts of having 160,000 volunteers and collecting more than 600,000 contributions nationwide.

“It’s the kind of campaign that takes an enormous amount of time and personal dedication,” she said. “Frankly, you can’t buy that.”

Becky Gerritson, a Cruz supporter and tea party leader in Alabama, one of several Southern states holding March 1 primaries, said Cruz’s effort appeals to frustrated conservatives who don’t just want an evangelical voice or a critic of politics-as-usual, but a “proven fighter” who demonstrates that “he shares all of our values.”

Cruz, she said, “understands the conservative grassroots, what we want.”

The senator hopes the network he’s building in that community ultimately will separate him in a primary battle that could go deep into the spring, well beyond the early voting states of Iowa, New Hampshire, South Carolina and Nevada.

Cruz recently spent time at his South Carolina headquarters making phone calls alongside volunteers before the South’s first primary. “You guys are spreading hope one phone call at a time,” he told the team.

The gathering of preachers in Texas this week, which is to conclude with a public rally on Tuesday featuring music by Christian rock band Newsboys, is the latest sign that conservative evangelical leaders may be coalescing behind Cruz. He has already announced the backing of Iowa evangelical leader Bob Vander Plaats and Focus on the Family founder James Dobson.

Cruz certainly has competition for evangelicals. Retired neurosurgeon Ben Carson, former Arkansas Gov. Mike Huckabee and former Pennsylvania Sen. Rick Santorum have made strong plays to Christian conservatives. But it’s Rubio and Cruz who are perhaps best positioned to harness evangelicals as part of a challenge to front-runner Donald Trump.

Recent polls suggest Cruz is leading in Iowa, where he has built a deep organization with endorsements from state and local officials and support in all 99 counties. He’s also seeking backing from at least one pastor in every county.

“He’s invested in a ground game,” said David Lane, an influential activist who has organized events across the state where Cruz has addressed pastors.

Cruz will be the only candidate appearing at meetings Jan. 25 in Cedar Rapids and Des Moines, the last such gathering before the caucuses a week later.

Lane said Cruz has cultivated leaders in Iowa’s evangelical community for a year. Rubio, he said, didn’t start reaching out until recently. “It doesn’t make sense.”

Cruz’s campaign says it has leaders in every county in the first four voting states. Spokeswoman Catherine Frazier said the same is true in 153 congressional districts in the 24 states that have primaries before March 15.

Shak Hill, a 2014 Republican candidate for Senate in Virginia, is co-chairing the effort to get Cruz elected in that state. He was among more than 1,000 people who showed up to hear Cruz speak in a weeklong campaign swing before Christmas that took Cruz to 12 cities in seven states that vote on March 1.

Hill said each of the state’s 11 congressional districts has a “Ted Cruz Champion,” and the goal is to drill down even smaller and find a chairman in every voting precinct.

Said Hill: “We’re building this from the bottom up.”